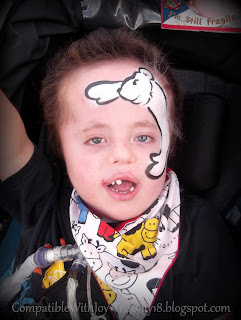 I'm afraid I've been a slacker in the writing department.  But there's soooo much going on, and with the kids out of school, I haven't figured out how to carve out my "quiet time" yet.

Aaron's doing well.  Cardiology increased his oxygen sats goal from 85% to 90%, which means we've been burning more oxygen, but if it helps his heart and lungs, we'll work with it.

He's also gotten out and about more lately.  We've been using the Upsee, and he's starting to get the idea that his legs are for pushing against the floor.

I have to "bounce" him a little, and then they engage.  He's got a loooooong way to go, but hey, we're here to make progress, right?

Anyway, I'm thinking that this summer's goal will be to keep up the blog with pictures. 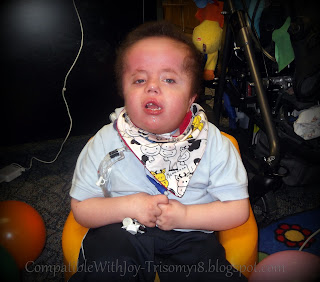 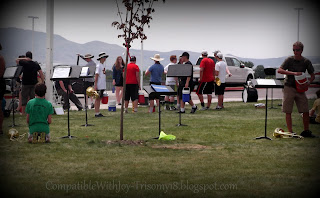 Summer Band Camp, and Prepping for the first parade. 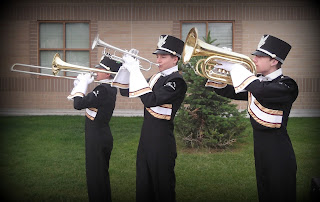 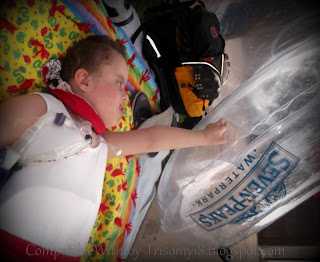 Playing with the tube at Seven Peaks
While we were there, I left Aaron for a few minutes with David (21).  As I came back, an older gentleman stopped in front of me and looked at them. Then he looked back at me and said, "It's nice to know there are still true heroes in the world." I said, "yeah, it is" and tried not to tear up. A brother's love is so precious.

Dream Night at the Zoo 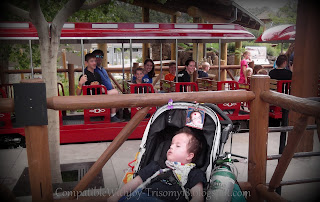 Last year, Aaron really didn't like the noise and experience of the train. Given his reaction to the loud noises at the band concert a couple weeks ago, we decided not to push it, and let another kid in a wheelchair enjoy it. But everyone else had fun! 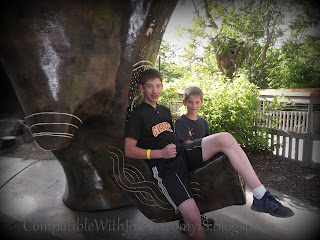 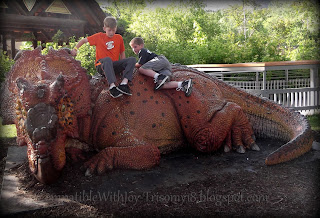 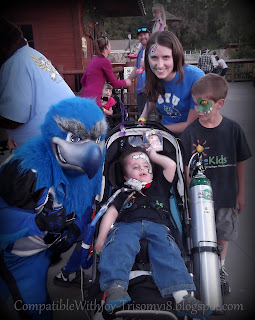 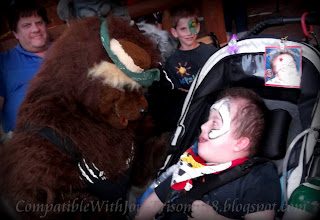 This particular one brought tears to my eyes.  Aaron was soooo fascinated by UVU's little Wolverine.  I didn't think I'd ever see him interacting with a character like this.  He played with the gloved hand, and then reached up to feel the "fur" and pull on the headband.  It went on for several minutes, and brought a lot of joy to this mama's heart.


Dream Nights at the Zoo is an international event for families with children with disabilities or chronic illness.  Early in the evening, a gentleman with a couple of young kids stopped us and asked how to get in on such an event.  I had to tell him that to qualify, you get to take a journey no one really hopes to ever have to go on.

Then, it was really brought home later that evening.  I had to go to the car to get another oxygen tank for Aaron, and as we were coming back in, sirens came screaming up the road.  My breath caught, and then released as they went by the entrance to the zoo.  But as I came to the gate, I realized, they circled around the back and were near the back entrance to the park.  I don't know what happened, and I'm not even sure they came into the zoo.  There are some other buildings and a few condos back there, too.  But oh, my heart sank as I knew that it was quite likely that they were helping one of our kids there.  I mean, our collection is more likely than the general population to need their help.  Kind of a sobering reminder of this world we move in. 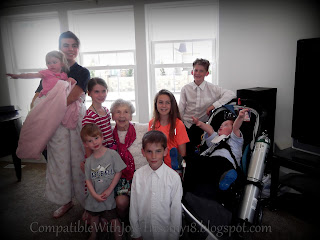 Getting together with cousins and Great-Grandma Kay on Saturday.

Saturday is Aaron's 5th Birthday.  We're going up to Salt Lake to do a 5K that raises money for SOFT, a wonderful group that promotes connection between families and research to help these kids.  If anyone wants to stop by that evening and wish him "Happy Birthday" that would be wonderful.  We won't be having a formal party that night as a lot of family members will be scattered hither and yon, but it's still his birthday.  And what a blessing it is to be seeing another one.

“When people look at my pictures I want them to feel the way they do when they want to read a line of a poem twice.”
― Robert Frank
Posted by CompatibleWithJoy at 9:25 AM