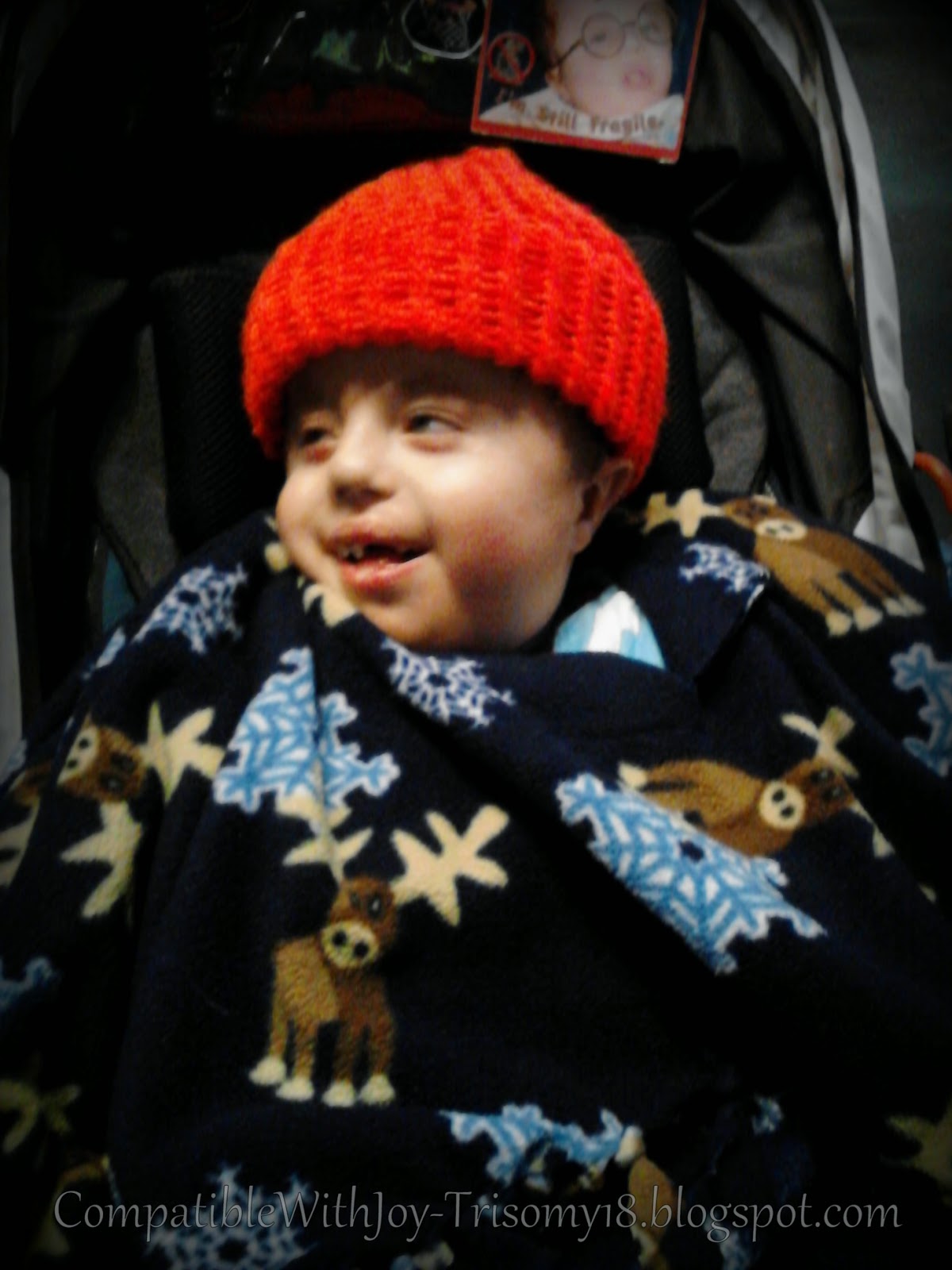 No, really, I'm glad!  Just over a week ago, I found Aaron with quite a bit of blood in his right ear.  He's got ear tubes in and our course of action is really simple.  Drainage (of any kind) and we start antibiotic ear drops.  We rarely see blood (like only one other time), so I also put in a call to the ENT because not only was there a lot, it continued through the night.

The nurse wasn't at all concerned, especially since I'd already started the drops.  But if it continued through the week, give a call back on Thursday or Friday and they'd squeeze him in the following week.  So I reminded myself that we'd gone down this exact same road a couple years ago (last time we had blood in the ear), tamped down my anxiety, and got on with the million and one other things going on.

By Friday, we still had a bit of brown drainage, so I called and they scheduled us for yesterday.  In the meantime, we also tried to upsize his trach.  Unfortunately, he didn't do so well with that one.  By Saturday night, I had to change him back to his original trachs.  I'm still a bit perplexed on that one.  All his vent output numbers were the same as with his old trachs, but his heartrate and respiratory rate became waaay too high.

Sunday, he was still kinda "off" and by Sunday night/Monday morning, his oxygen needs were high, too.  And frankly, if it had been the trach, that should have resolved long before them.  So he took Monday off of school.  (Again, third time in a row!  I'm beginning to think this kid's got something against Mondays.)  And my worry-meter shot up a bit more.  He was doing okay  when asleep, but eating or awake, and even better when both eating and awake, he was needing way too much of that good O2, like about three times more than usual.

So the plan was to head into the ENT appointment, see what they found, and then probably head over to the emergency room for a cardio work-up.  'Cause it wasn't his lungs.  They sounded good and I wasn't able to pull anything out of them.  It was pointing towards worsening pulmonary hypertension tending towards heart failure.  And the anxiety ratcheted up a bit more.

BUT, when we got to the office and she pulled up the microscope and pried his tiny canals open, there it was.  His tube was intact, but completely blocked up again.  And when she suctioned it out, drainage started pouring out from behind the eardrum.

Poor baby.  He was not happy at all.  He was a real trooper, but imagine someone putting a speculum into your ear, and then deep suctioning it out.  Not only the feeling, but also the noise.  And remember, he doesn't hear so well through those ears because his canals are collapsed.

At first it was the startled eyes, then a big pouty lower lip.  It startled to tremble, and the crocodile tears started.  Finally, the whole body shudders and sobs joined in.  My heart both ached and was glad.  Ached for his pain, but rejoiced that we had a good and easy answer for his instability.

And funny enough, by the time we left the hospital, his oxygen needs had already dropped by almost half.

He's still not 100%, he's a bit more tired than usual and on a touch more oxygen, but I'd put him at 95%.  So yeah, hooray for ear infections.  'Cause it's so much better than the alternative.

Posted by CompatibleWithJoy at 3:44 PM