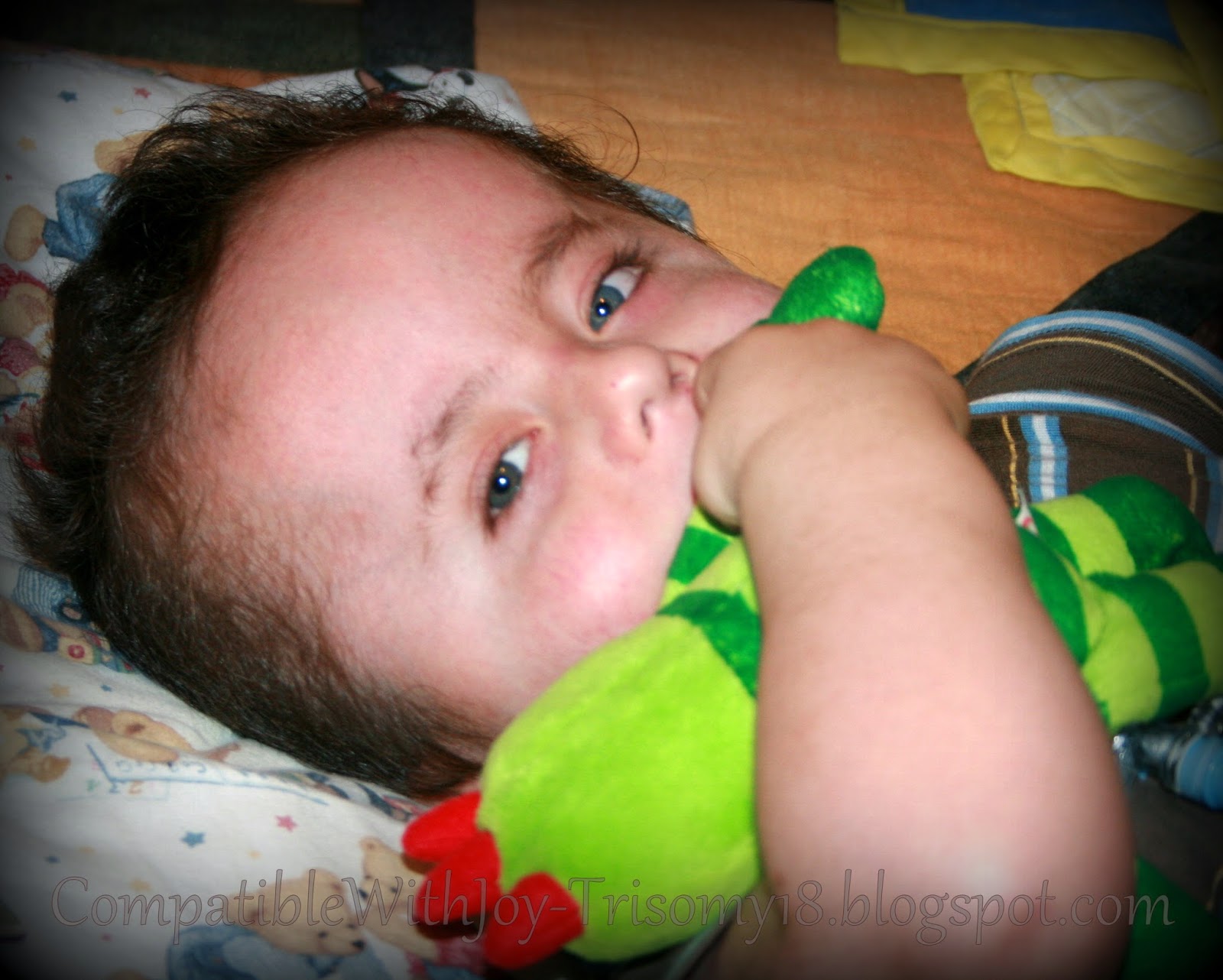 Aaron's been getting a lot more plugs lately.  We had our first one back in August, like, first one EVER!  Which is quite an accomplishment for a trach kiddo.  But since then, we've had a few others.  Including one a week ago, and one exactly a week before that.

So I put in a call to our good ol' Trach Whisperer.  She claims it's because he's getting bigger, who'd have thunk?  Apparently, the bigger you get, the bigger your boogers.  (Sorry, it's a fact of life.  He's got them, I've got them, we've all got them.)

As long as he was breathing well, meaning oxygen (O2) in and carbon dioxide (CO2) out and no plugs, we were good to sit where we were.  Which was with our original trach size.  Yeah, the ones he got back when he was a little 4.5 kilo (about 10 pounds) munchkin.

Now he's a much bigger munchkin, like closer to 18 kilos, or about 40 pounds.  And guess what, when your outsides grow, so do your insides.  So he needs a bigger trach.

We don't actually go in to trach/vent clinic until January, and the thought is that since he's still ventilated, he'll need a cuffed trach again.  But the whole reason he was trached has resolved, like, resolved almost two years ago.  And yes, he's still on the vent.

But if he's got a bigger tube, could he breathe better, maybe even off the vent?  Could he maybe get away without the cuff?  I even asked for permission (instead of forgiveness like I usually do) to see if I could try him on the bigger size without the cuff.  I thought I had one or two larger trachs in the basement.  Unfortunately, no dice.

So I asked some of my awesome friends in the special needs world if they had any spares.  I mean, I've got any number of neighbors that I could borrow a cup of sugar or a couple eggs from.  Trachs, well, not so much.  And they are all sorts of sizes and styles of them when you do find someone who's using one.

And just down the road is a girl who's cute daughter uses the bigger size we need.  And she had an extra!  It doesn't have a flex-end (the flexible part that is on the outside, makes it so the vent tubing doesn't pull so much on him), but it's the right size for the inside of him.  I waited until this afternoon to try it.  Frankly, if he's not going to tolerate it, I don't want him at school, or even better, on the school bus when things go south.

And so far so good!  He IS pulling the vent tubing off it at an alarming rate.  It just pops off much easier than the flex-ends.  But it's a really good starting place.  And another friend in California put two of the same size, but with flex-ends, in the mail for me and they're supposed to be here tomorrow (which will keep my monkey from disconnecting himself every five minutes.)

So I'm watching, carefully.  If he starts to hold onto too much CO2, we'll have to go back to his old trachs until we can get a cuffed one.  And I'll probably wait until we are seen to do that.  But if he can maintain well, if he keeps his respiratory rate and heart rate down, stays playful, we'll keep him right where he is.

And maybe, maybe, just maybe, this will be the key we need to breathing on his own.  Who knew a millimeter could make such a difference?  Going from breathing through a 3.5 millimeter opening to a 4.5.  I wasn't kidding when I called it a pixie stick.


Life loves to be taken by the lapel and told: "I am with you kid. Let's go." ~Maya Angelou

Posted by CompatibleWithJoy at 7:57 PM