A First Time for Everything, or This Mama's a Bit Gun Shy

Aaron has been (or had been) off for a few days.  On Tuesday, I pulled a bunch of blood out of his trach.  Not just a little, quite a bit.  Like way more than I've ever seen before.  That prompted a quick phone call to the office to ask for a day off and another to the hospital to check on some things.

Then on Friday afternoon, just as I was getting things lined up to go to a friend's wedding, his heart rate shot up.  It wasn't crazy, emergency high.  Just 20-30 beats above what it usually is.  Yeah, fever-coming-on high.  So I watched.

Wanna talk about compulsive?  I think taking a temp every 15-30 minutes is a bit of overkill, but I was doing it!  (And maybe closer to the 15 minute mark.)
It was a low-grade fever, just about a full degree above where he usually sits.  And there was some color in the stuff we were pulling out of the trach,not much color or quantity.  But I was still on edge.

Saturday things continued kinda along the same path.  By Sunday, I'd had enough.  While William and the kids were at church, I talked myself into thinking that it was possible there was something more going on.  When they got home, I told them I was heading up to Primary's to get him checked out.  They told me they'd see me sometime next week.  Yeah, it's kinda become a familiar refrain.

As we left, he was on five liters of oxygen, but before we even hit the turn-off for the Lone Peak Fire Department, we were using seven.  I even briefly considered turning in and telling them I saved them coming to get us, but we needed a ride anyway.  But  I also figured it was a Sunday afternoon and traffic was going to be pretty light.  I could probably make it, so we went on, and I tried to tell him to cool his jets!

When we got there, he was between five and six liters, but starting to be pretty smiley.  We talked about admitting him, but there are so many germs up there that I told them if it looked like it was just viral, I was pretty sure I could handle things at home. 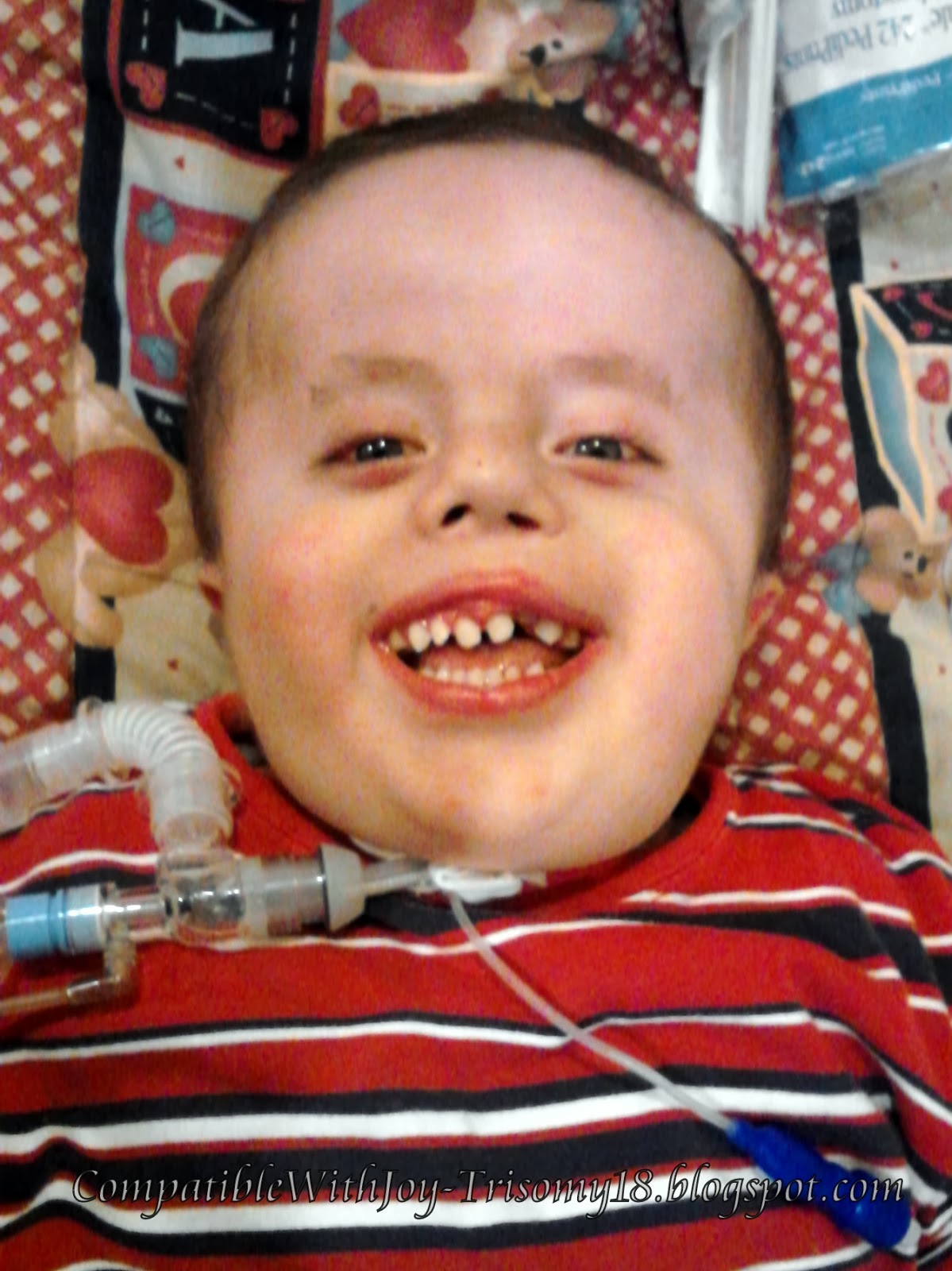 It took quite a long time to get his labs and x-rays.  I always make sure I see the x-rays when they take them.  Yep, it looked like Aaron:  Cloudy with a chance of junk.  BUT, unlike the last two times we've done this, instead of deciding he wanted more and more and MORE of that lovely oxygen, Aaron was content with less and less.  By the time the labs came back (and were perfect!) he was actually down on two liters.  TWO!! 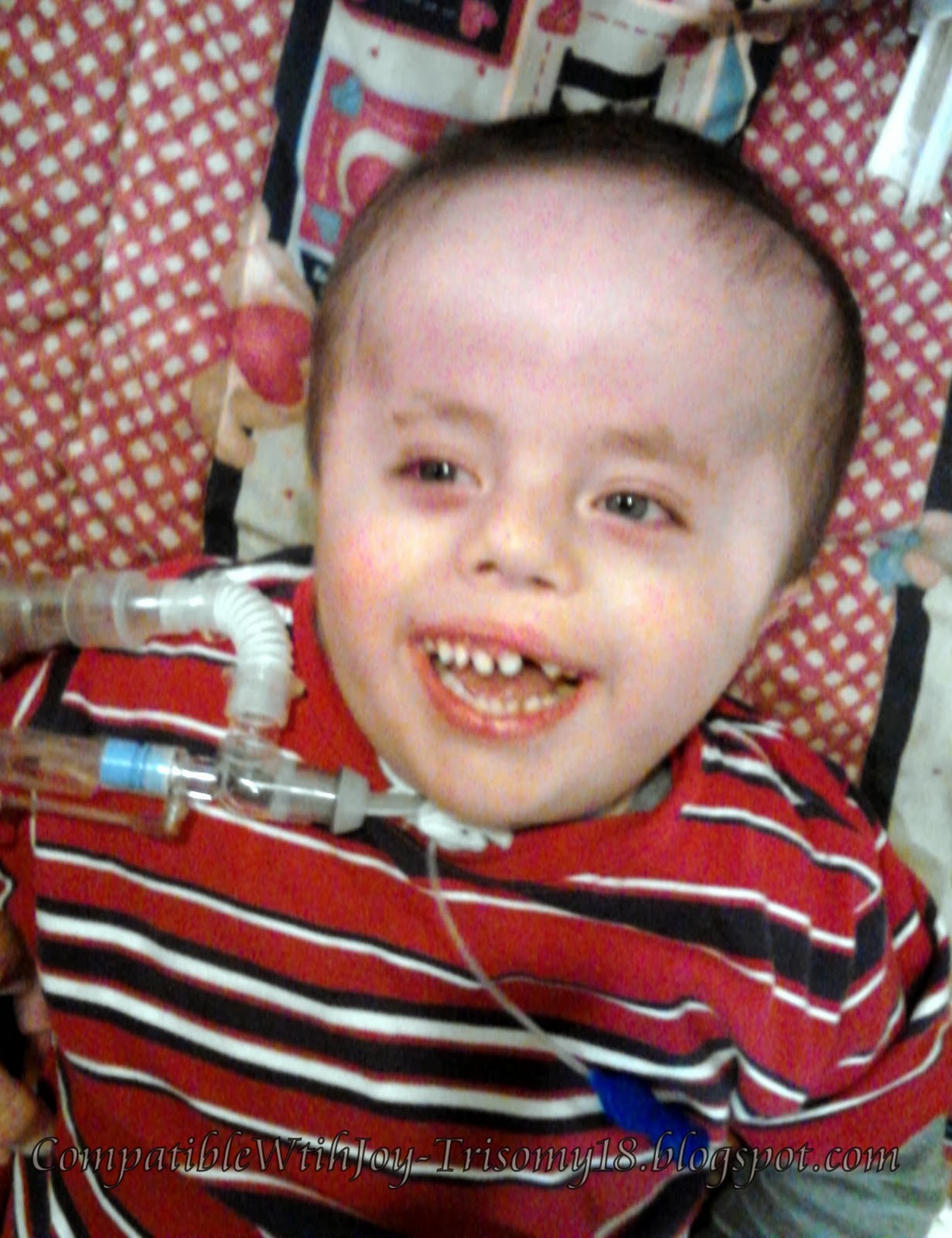 So yep, they gave us our marching papers and we were outa there!  First time, VERY FIRST TIME, we've gone to the ER for anything except minor stitching and come home again.  Yeah, I think I'm a bit gun shy here.  But that's okay.  It's all good.  And he was very smiley tonight, too.


Don't refuse to go on an occasional wild goose chase -
that's what wild geese are for.  ~Author Unknown
Posted by CompatibleWithJoy at 9:24 PM