Weighted Blanket for Almost Nothing 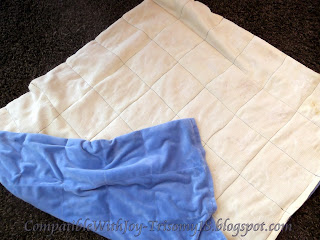 Prior to my introduction, (or forced initiation) into the special needs world, I had never heard of a weighted blanket.  I've since learned that many kids with challenges use these to help them feel in control, or give them comfort.  They're especially widely used in the autism or sensory disorder community.

Aaron doesn't struggle with those, but for quite a while now when he gets really tired, he gets very agitated.  He'll rock back and forth, almost violently.  So I was trying to find something that would help him calm down.  So this what was recommended.

But I wasn't sure he'd really like it and I didn't want to spend a lot of money on something if it didn't work out.  You can buy Poly-Pellets from a store like Joanns, but they're about $7 for two pounds.  The plus side is that they're machine washable.  The down side is that Aaron needs a blanket weighing about five pounds.  I'm thinking that's a bit of cash for something that might or might not work.  (For children, the recommendation is about one pound of filler per ten pounds of the child's weight, plus one more pound.) 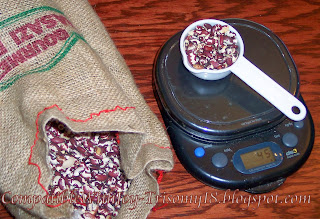 So I went looking for something else I could use and found beans!  Yep, we've got some pinto beans sitting around.  I'm not sure, but I think they came from William's grandmother's food storage.  Even if they didn't, you can tell by the color contrast that these are very old!

I also had some fun fabric down in the basement.  Even better, one of the pieces was already blocked out in squares, so I didn't have to measure and mark lines on it.

I counted out the squares I'd have (48, six across, eight down) and divided five pounds by that.  Then used Aaron's scale to figure out how much per square.  Turned out to be about a quarter cup. 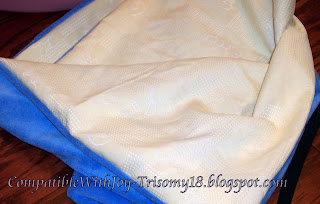 I sewed the two pieces of fabric together on three sides, right sides together and then turned them right side out.  Then I sewed columns down the fabric.  I put 1/4 cup of beans in each column and sewed across the top of the square.  Repeated until all the columns had been turned into squares.

Then I turned the top edges under and just stitched across.  You could also hand stitch it with a blind stitch, but that was more than I wanted to do.  Plus this way the seam is stronger. I have more faith in my sewing machine to do a strong stitch than I do in my own hand sewing.

The beans are old enough that I figure even if I soaked them for days, they'd still not sprout.  I have washed it a few times, but only on a delicate cycle and air dried it.  I have no desire to beat my washer and dryer to death. 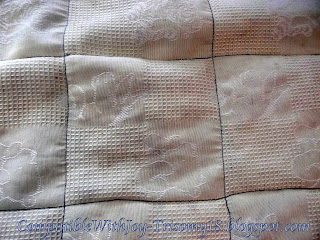 And how does he like it?  He loves it!  It really helps him calm down and go to sleep.  I even finally took it with us the last time he was in the hospital and I think it helped him relax.  His nurses loved it, too.  Frankly, it feels like a hug.  Plus, the sound of the beans is almost musical.  Naptime anyone?

Think what a better world it would be if we all, the whole world, had cookies and milk about three o'clock every afternoon and then lay down on our blankets for a nap.

Posted by CompatibleWithJoy at 10:03 AM