My Savior, My Friend 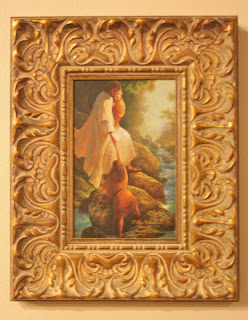 
Tonight William, David and I attended Seminary Graduation.  For people not familiar with the LDS (Mormon) faith, our high school kids attend a religion class through their high school years:  Seminary.  At the end of high school they have a graduation, much like high school graduation, including speakers and musical numbers and diplomas.  It's a good thing, and like the good mother I try to be, I want to support my kids.  So it's an important night to be there for.


What I wasn't counting on was the reminder I needed about where my strength needs to come from.  No, this doesn't mean that sometimes things aren't hard.  And it doesn't take away the emotional challenges that I often face.  What it did do was recall to my memory truths that I sometimes forget.


My reminders began with a hymn, one of my favorites:  "I Believe in Christ."  The fourth verse is especially poignant to me.  About a year ago in church we were singing it and I was watching Aaron.  As we reached the fourth verse, it was as if his soul spoke to mine and he told me, "Yeah, Mom.  This is what it's all about.  Someday all my pain and trials will be over and I'll be whole.  I run and laugh and jump in your arms.  It will be so much fun.  But for now, it's okay.  I'm good.  It's all so worth it.  Jesus loves me and He loves you, and it's going to be okay.  Because this life, that's not all there is.  There is so much more for us.  And it is better than you can imagine."  As the young girl tonight sang, I couldn't hold back the tears, but they were happy tears.

I believe in Christ; he stands supreme!
From him I'll gain my fondest dream;
And while I strive through grief and pain,
His voice is heard: "Ye shall obtain."
I believe in Christ; so come what may,
With him I'll stand in that great day
When on this earth he comes again
To rule among the sons of men.

There is no way she could have known that I needed to hear those words, in her clear, sweet voice.  Yes, there is grief and pain, immense amounts of it.  But with His help, I can make it through.

If that was not enough, the next speaker quoted extensively from a woman I have always found inspiring.  Chieko Okazaki does not sugarcoat or mince words, but she tells it like it is in the real world, warts and all.  But at the same time, she uplifts.  The following is from her book, Lighten Up! (pg 174-175)

We know that on some level Jesus experienced the totality of mortal existence in Gethsemane.  It's our faith that he experienced everything -- absolutely everything.  Sometimes we don't think through the implications of that belief.  We talk in great generalities about the sins of all humankind, about the suffering of the entire human family.  But we don't experience pain in generalities.  We experience it individually.  That means Jesus knows what it felt like when your mother died of cancer -- how it was for your mother, how it still is for you.  He knows what it felt like to lose the student-body election.  He knows the moment when the brakes locked, and the car started to skid.  He experienced the slave ship sailing from Ghana toward Virginia.  He experienced the gas chambers at Dachau.  He experienced napalm in Vietnam.  He knows about drug addiction and alcoholism.

There is nothing you have experienced as a woman that he does not also know and recognize.  On a profound level, he understands about pregnancy and giving birth.  He knows about PMS and cramps and menopause.  He understands about rape and infertility and abortion.

His last recorded words to his disciples were, "And, lo, I am with you alway, even unto the end of the world." (Matthew 28:20)  What does that mean?  It means he understands your mother-pain when your five-year-old leaves for kindergarten, when a bully picks on your fifth-grader, when your daughter calls to say that the new baby has Down's Syndrome [or the doctor calls to say your amnio was positive for Trisomy 18] . . .  He knows all that.  He's been there. He's been lower than all that.

And just like that, it was all I could do to keep from sobbing.  Because it's true, and I know it, and I have known it.  But for a little bit, I think I might have forgotten.  He's always been there for me, when I was willing to reach out for Him.  His arms have always been open to me, lifting me, holding me, carrying me.  And I know he always will.


So tonight, I will say a special thank-you to my Heavenly Father for allowing me to hear these two sweet girls.  For using them to speak to me, to remind me of His love for me.

Posted by CompatibleWithJoy at 10:26 PM