A Busy Week and Looking Forward to a BIRTHDAY!! 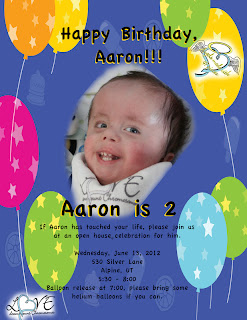 First things first, and most important:  Aaron is almost two years old!!  Yea for him!  He's come so far since that cold winter day when we were told he might not even make it to birth.  If he's touched your life, even if you're not sure we know you "that well," please come celebrate with us.  We'd love to see you and share this day.  It will be on his birthday (of course), Wednesday, June 13th from 5:30 to 8:00 p.m.  at our home at 530 Silver Lane, Alpine UT.

We'll have a balloon release at 7:00 p.m. and would appreciate it if you could bring some balloons to let go.  So many angel friends have returned to heaven since he was born.  We'd love to share the party with them by sending some balloons to play with.

We've had a crazy week around here, and the next few days don't appear to be any different.  We've had seminary graduation and kindergarten graduation.  Tomorrow is high school graduation and Wednesday is 6th grade graduation.  Today is Andrew's 9th birthday and I just finished up a first aid merit badge class for a few scouts.  And I know there's other events that I'm not thinking of right now.  Yeah, it's crazy.

Aaron upsized his trach last week to a pediatric length from a neonatal one.  He started decannulating (having his trach come out of him) on a fairly regular basis.  So we've increased the length to give us a little more wiggle room.  It's just not a good thing for that to not be tight.  That whole secure airway thing?  Yeah, gone without the trach.  In fact, almost the opposite.  It's essentially no airway the way he's put together.  So a larger trach was a really good idea.  He didn't think so for the first couple hours.  It is longer so it's a little more irritating.  But he seems to have gotten the hang of it now. 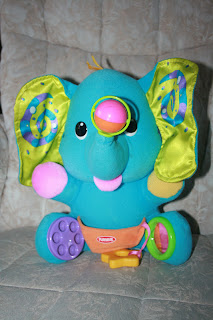 Years ago, and several kids ago, I bought a really cute elephant for one of our babies.  I can't even remember which one.  (Is that a bad thing to admit?)  Anyway, I thought it was adorable.  My baby, and the subsequent ones?  Not so much.  Notice how it still looks brand new?  They were just too busy being mobile and exploring everything to do much with this big blue toy.

But Aaron, he's not mobile.  And it's just about the same size as he is.  I sat him up in his bed the other day and put it right in front of him.  He looked at it for the longest time, studying first one part and then the other.  I think he was trying to figure out if it was going to get him.  The he finally, after several minutes, reached out his right hand, ever so slowly, and spun the ball on the nose.  Then he smiled.  Yeah, I think the elephant has finally found a friend.

Posted by CompatibleWithJoy at 12:19 PM