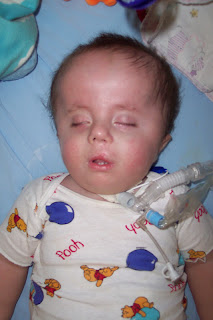 This one has been a rough bug for Aaron.  It's taken a lot of work and strength for him to fight this one off.  See, it wasn't even that bad as colds go.  But his lungs didn't feel the same way.  For them it was knock down, drag out fight.  And there was (and may still be) considerable concern that it may have done lasting damage to those already sick little lungs.

Our last few days have been pretty rough.  Aaron did exactly what he needed to do to get out of the hospital.  He was on 2 1/2 to 3 liters of oxygen for 24+ hours and only needed suctioning to bring him back up quickly when he'd drop his oxygen saturations (desat).  So we were discharged.

Literally as we left the hospital, he started changing.  As I buckled him into his car seat, I had to turn him to 4 liters.  It became 5 before we hit the freeway.  We bounced between 4 and 7 liters for the next two days, with occasional brief periods even higher.  We stayed home because he was still in fairly good spirits, and to be honest, there's not much more the hospital can do right now, especially since we can't get an IV in him until his veins heal up from our last many attempts.  Can I tell you I was not a happy mama?

BUT starting yesterday evening, we've started seeing signs that he's almost back to where he should be. Instead of a restless sleep, he's sleeping deeply and quietly.  Instead of nasty, thick secretions being pulled out just about every hour, it's much less often and they're thinner.

I discontinued his breathing treatments because he actually seemed to struggle more during and just after them.  I know I can restart them if he seems to need them, but for now they weren't accomplishing any good.

And this morning, he was wiggling and squirming all around with two hands tucked into his cute little smile.  He was saying, "all right, I'm ready to go again.  Let's play!"

Just now, he's sleeping.  And his heart rate, it's down.  That green number in the picture is his heart rate and the red is his oxygen saturation.  Both right where I want to see them.  And it's really hard to see, but the little silver ball on the oxygen concentrator?  It's on 2.  That's right, 2.  I'm finally breathing better myself. 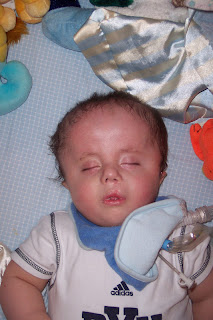 Posted by CompatibleWithJoy at 8:57 AM