﻿ ﻿
Aaron has made HUGE improvements today.  He started the day at 80% FiO2, except when he was 100%.  He's also been getting these newer breathing treatments designed to help loosen the junk in his lungs.  We don't know if it's those treatments, they are making it easy to get a lot out, or Tincture of Time.  But about mid-morning we started turning down his oxygen.  And down, and down.  Most of today he's been between 45% and 50% FiO2.  We even stopped for a little while at 40%.  If he can maintain at 50% or lower though the night, they'll start trying to wean off his nitric oxide tomorrow.  YEA!!!

He's still sleepy, maybe starting to wake.  Heart rate 117, oxygen sats 95%, FiO2 95% (amount of oxygen he's needing).  He's needing so much oxygen because he's still really upset about his big desat at 3:30, even though he's also still asleep.  I'm trying to go through the emails and calender for the family at home.

Okay, he's waking up with LOTS of coughing.  Back to 100% FiO2 and suctioning.  He's back in the high 70's again and not at all impressed.  I can't say I blame him.  I'm not impressed either.  He's pretty miserable.

Time for trach cares and CPT and he's awake and smiling again.  He's a little bit warm, 37.4 axillary (99.3 F) but that also may be because he was so angry.

Oops, RT was called away to transport a patient to the OR.  He'll do CPT when he comes back.  Aaron is awake and playing with his toys, squeaking at them. 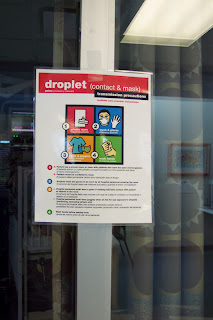 He's blowing lots of snot bubbles so I suction him out.  He is NOT happy with me.  I help him calm down and then go to warm some dinner in the microwave  down the hall.  While I'm gone, the RT comes back and he's more than happy to have his CPT.  His 5 p.m. feeding should be in soon, too.  By 5:20 CPT is done and the little monkey is asleep again.

The night attending comes in to check on him and assess.  She suggests adding a breathing treatment of muci-mist and albuterol to see if we can start to mobilize some of the secretions that are stuck in his lungs.  If he can start moving the nasty, thick junk in his lungs, he will feel better and oxygenate better.  And his lungs and heart won't have to work so hard.

He desatted just a few minutes ago, again, maybe because of a diaper change.  Back to 100% FiO2.  By the time I get my things together, he's sound asleep and recovered nicely.  He's satting 92% on 85% FiO2

Time for food! (for Aaron)  He's also getting his first assessment from his night nurse.  He's still really sleepy.  It doesn't bother me much, but I do hope he wakes up and is really playful soon.  Besides, he's got these great balloons from his friend P. to play with!

STILL sleeping.  He's getting his CPT and his breathing treatment.  Praying this works.

He's awake!  And ready to party!  He definitely has a fan club around here.  So many have stopped in to see him.  N, who has taken care of him several times just left.  I love that they care so much about him.  This little guy has touched so many.

He actually dozed off again right after waking up, but only for about 20 minutes.  Then it was wide awake time!  He loved the balloons P sent to him. This is one of those times I'm a little bit grateful that the trach keeps him quieter.  He's ready to rock-and-roll, but I'm beat.  The PICU is one of the best places there is for sick kids, but it's kinda rough for sleeping soundly. So I'm calling it a night.

A resident is in here checking on him and he (Aaron) seems irritable and uncomfortable.  Guess what.  The fever that has been absent for the past 24 hours has reappeared.  It's 38.5 (101.3 F).  So we'll have ENT come in later.  And he can have Tylenol again.  Poor baby.

I woke to Aaron crying.  And crying.  And crying some more.  He popped his ballard off while his nurse was next door with her other patient.  (It's not what is normally thought of as "next door."  There's a sliding glass door that connects the rooms and can stay open.)  By the time she got in here, he'd dropped to 69% and was NOT HAPPY!  It took quite a while to bring his sats back up and then calm him down.  I went back to bed with an ear out for the vent to try to keep it from happening again.

He's popped his ballard off thee or four more times since 4:30.  I finally got a twill tie (think flat, wide shoelace) to try to tie it on.  It helped but he still managed to get it off a time or two after that.  Each time I was the first to him and had him put back together before the nurse was in.  Sometimes she didn't even realize anything had happened.  We missed R from the previous nights.

He's finally starting to look sleepy.  Here's hoping he sleeps, and that I manage to sleep through shift change in an hour.

﻿ ﻿
So this is our 24 hours in the PICU, and it's fairly typical of what happens in our little room.  The unit is kind of a little community itself.  It bustles with nurses, techs, respiratory techs, residents, medical students and attending physicians (the teachers).  They have IV teams that come and go along with radiology and all the specialists that get called in.  Sometimes the patients have to leave to go to the OR or down to a clinic, but often everything is done right in the patient's room.  I mean, just to move Aaron we would have to take his IV pole, his bed, his ventilator with oxygen attached, and his nitric oxide pump with canisters.  And he doesn't have nearly as much as some kids.  So trying to move them is a challenge at best.  But the staff here, they are awesome.  You get the distinct impression that they think they've got the best jobs in the world.  And I'm so grateful.

Posted by CompatibleWithJoy at 8:08 PM