I think we might finally be seeing some improvement.  At least he's a whole lot happier.  Playing, smiling, disconnecting monitors, you know, acting normal.  He is running fevers pretty consistently, which is new over the last 24+ hours, so they're repeating more tests.  He's also still on the nitric oxide to help open the blood vessels to his lungs.  We're really praying that this virus doesn't do lasting damage to them.

Overall, it's a positive trend we think we're seeing, but we won't be going home anytime soon.  He's still on 55% to 65% oxygen bled in along with the nitric oxide, and that's when he's happy.  When he's feverish or upset, he needs more.  He needs to be consistently below 50% before we can begin weaning the nitric oxide down and that happensover a couple of days.  Then we'll have to return to our home vent for a period of time, probably a good 24 hours, before we can think about leaving.  So it will still be a while.

But he's being a real trooper.  He's on his 4th IV, and I've lost count of the pokes it's taken to get those.  It's actually interesting.  I can tell when they've gotten one because those are the pokes that hurt.  The other ones, the ones that don't work, generally don't bother him too much.

Yesterday, I was reading a novel about a heart transplant.  The main character had been born with a congenital defect, probably Hypoplastic Left Heart.  But one of the most interesting passages to me was the description her mother gave of her own role in her daughter's life: 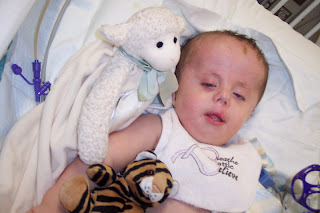 "But ever since the first night Vida was born, I've been told to prepare myself to lose her.  But when you're a mother, there's just this part of you that can't accept that.  Even when you know there's nothing you can do.  You just can't let it be that way.  You can't.  So you put every ounce of energy you have into keeping your child alive, and then after a while you start to feel that it really is you keeping her alive.  You know.  With that sheer force of your will."

This really spoke to me.  You begin to feel that if you can just work hard enough, run fast enough, learn enough, that everything will work out.  On Friday, a mom told me that she didn't know how moms like me go on knowing that each day our babies could die.  I've been asked similar things in the past on occasion.

I think the answer is kind of two-fold.  The first and basic answer is, we forget.  We forget that they're not "supposed" to live.  We forget that they really are so fragile.  I think it's a defense mechanism that God grants to us so that we can enjoy our little ones.  And whatever we're doing, it becomes our normal.  Honestly, we don't even see Aaron's tubes and wires any more.  HE obviously does, because he thinks they're toys.  But that's how he sees them: toys that are always within reach.

The second answer has to be that I know this life is not all there is.  Aaron has already done what he needs to do in this life, gain a body.  The rest of his life is for us.  And I plead, I really do, for Heavenly Father to grant us more time to enjoy him.  And on more than one occasion, I've gotten the impression that his life has been spared in response to those prayers. Not spared for him, but for me.  Please don't think I'm saying that those he takes home are any less precious to Him, or that their parents are.  I just think that this may be one of those personal blessings in my own life.  And I am so grateful.

Posted by CompatibleWithJoy at 11:19 AM