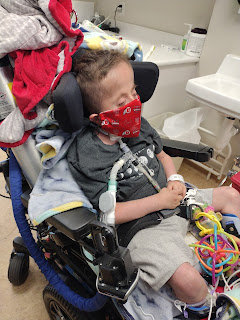 It's been ten days.  Ten whole days.  Except this didn't just come out of the blue.

Aaron started acting pretty tired on Saturday.  Sunday was also lethargic.  He started running a low-grade fever, but nothing else really going on.

Of course, he also wasn't "going" either.  So Monday morning when he'd popped a higher fever, we tried to "clean him out."  It sorta worked, and it dropped his temp back down too.

So instead of heading to the hospital, we tried to go to the pediatrician.  It looks like that darn ear drum healed before all the bacteria was taken care of, so they put him on an antibiotic that would cover it.  (Can I just say I love our ped!?!) Anyway, we got it on board and waited for the magic to happen.

Yeah, fevers kept going, and kept moving higher.  He slept more.  I tried another clean out.  Tylenol.  Motrin.  Storming rescue med.  Nothing worked.  They didn't even put a dent in his temp.  This morning he was 102.5.  Later it was 103.3.

So we gave up.

He's been admitted to the floor (so not the PICU, take our victories where we can) and he's still sleeping.  He didn't even flinch or pull away when they got his IV. 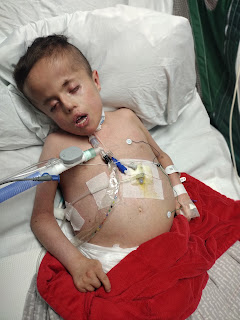 Viral panels all came back negative, so there's that at least.  X-ray showed a pneumonia in his left lung and a diffuse ileus or, less likely, a possible bowel obstruction.  Essentially, the muscles that work to move things through are on strike.  Dr said that can happen with a lower lobe pneumonia.  This kid's belly?  Yeah, it's big.  Like everyone who saw him was taken aback.

So it's IV antibiotics for the lungs and IV fluids to keep him hydrated while we give his gut a rest.

But he's not septic, which was my biggest worry, and we'll get through this.  I'm just hoping that Friday morning's commute isn't as ugly as yesterday's.  I have class and we're starting final presentations.  Almost done with the semester.  Fingers and toes crossed that I can make it.

I would make good health catching, instead of disease.
~Robert G. Ingersoll
Posted by CompatibleWithJoy at 8:36 PM