Summer: Rest, Relax and Heart Cath (One of These Things is Not Like the Others) 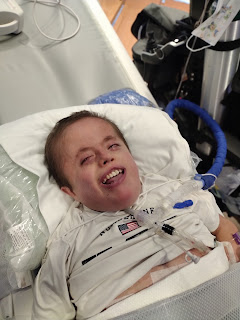 I LOVE summer.  I even like the heat (most of the time).  Days are slower, less hectic.

And while Aaron doesn't read, he loves to be read to and he seems to be handling the other three as well!

It's been a slow process.

Just over five months ago, our traumatic hospital stay started, and only a few days shy of when things got truly awful.  Remembering him lying so still, so swollen, so non-responsive is beyond painful.  I asked my mom sometime this spring (April-ish?) how long it had taken for her to start to feel like she might recover after her own battle with sepsis.  She replied, "Oh, months. Months and months." 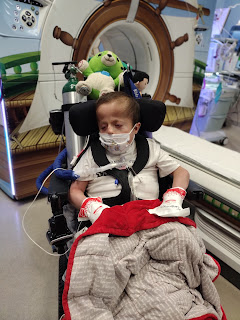 Well, here we are, five months out.  And guess what?

It's starting to look really good again!  He's smiling, he's playing, and while he doesn't have the energy he did before, it seems to be improving as well. 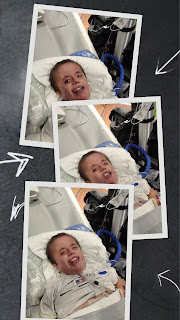 He has struggled lately with a lot of digestive issues.  We've been working on his diet but finally his ped and I decided that things were just too suspicious to keep waiting. He ordered an abdominal and pelvic CT scan with contrast for Friday, June 24.  We went up and Aaron was doing okay.  He wasn't thrilled about taking in a liter of fluid over about 30 minutes, and he really didn't like the IV, but after that?  Well, I love how Primary's tries to make things as fun as possible and the CT room is no exception.  Apparently he thought it was pretty cool, too!  We placed him on the gurney and he just grinned and laughed as it slid in and out taking pictures.  Five minutes later (maybe not that long), he was done and we were on the way home.

And what did it show?

Well, the digestive part was pretty unremarkable, which is great!  But just because you're looking at the digestive system doesn't mean that the rest of things just get out of the way.  We also saw his lower lungs, his diaphragm (both a bit abnormal but nothing new there), and his blood vessels.  Those blood vessels...

I don't think there's really anything "awful" about what's going on there, but he's definitely got some funky stuff going on.  And that CT scan that we just barely had, that showed us this?  Well, that is going to make a big difference this week. 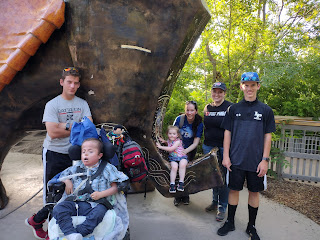 I mentioned that we were going to switch out one of his cardiac meds for another one.  Well, that experiment did not go well.  I have no idea what it did or would do for his heart because his digestive system did not like it.  At. All!!  In fact, when we went to DreamNight at the Zoo, he was either out of it or miserable.  It's so hard to watch your child struggle and suffer and not be able to do anything to fix it.  While I think everyone else enjoyed the outing, it was very much bittersweet for me.  Hard to see him so apathetic to what used to be a fun outing, but at the same time, I saw so many friends that I never see.  While the kids (okay, most are adults now) enjoyed the zoo, it was seeing other special needs moms that filled my soul. 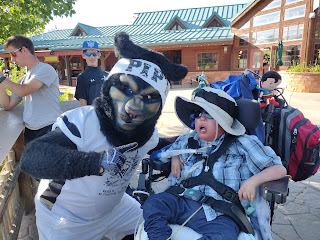 Anyway, back to the CT scan and where that's going.  I was able to speak to the cardiologist who is scheduled to do Aaron's heart cath and we are going to go ahead with that procedure.  She feels the risk is more than outweighed by the benefits and after talking with her, we agree.  But having that new information ahead of time means that there will be fewer surprises when she goes in, and hopefully none!

So we will be heading to Primary's on Friday, July 8th, for his heart cath.  She will "probably" go in through his left femoral site, try to get pictures and possibly repair the fistula on his right femoral artery/vein, and then move into his heart to get more information and possibly open up his PDA more.

It's risky.  Truly.  As I've mentioned before, his asthma and pulmonary hypertension are not friends with anesthesia.  And a heart cath brings its own risks to the table.  But the benefit would be a more energetic, longer life for him and after reviewing the risks (again), we decided we need to give him that chance.

So I guess the long and short of it is, please pray for him, for us, and for the doctors and staff who will care for him.  Today is Fast Sunday for our church, and we would ask that if you're willing, you'll remember him in your fast and prayers.  I believe in miracles.

"God's gifts are measureless, and there shall be
Eternal summer in the grateful heart."
~Celia Thaxter
Posted by CompatibleWithJoy at 9:38 AM