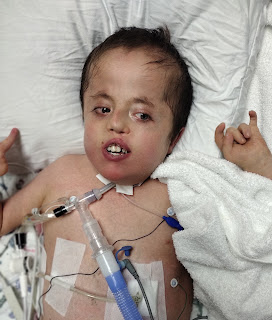 Heart cath was yesterday, and by all indications, it went really well!

I haven't been this nervous for a procedure for a long time.  Of course, it's also been a long time since he's had one.  2017 to be exact.  His last heart cath.  The one where we decided that we weren't going to be doing that again without a really good reason.

We had a really good reason. According to his last echo, he was in rough shape.  His pulmonary hypertension is working his heart too much, and there wasn't much of an outlet.

Think about a traffic jam where all the cars are trying to get through.  Or maybe a really crowded highway.  But often there are other surface roads that might help relieve the congestion. 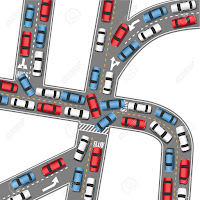 Most of us don't have any "surface roads," but we also don't need them.  Our "highways" are more than sufficient for the "traffic."  His?  Not so much.  So that's what yesterday's plan was.  Construction to widen a surface street to alleviate some of the congestion.  Does it fix the problem?  No, not at all.  Still too much flow for the vessels and like taking a surface street, it's not ideal.  Frankly, we put a bandaid on a pretty big wound.  But that bandaid does buy time.  And time is precious.

Reality is his numbers were ugly.  Our pulmonary pressures are about 1/3 of our systemic pressures.  (Blood pressure in the lungs vs blood pressures throughout our body.) Not his.  At his last cath in 2017, the numbers were pretty equal.  This time, at the beginning of the cath, his lung pressures were about 30 points higher than his body pressures.  That's not good.

The doctor was able to open up his PDA some, actually about double in size from 2mm to 4mm which will definitely give some relief for the right side of his heart.  On the other hand, it will also lower his oxygen saturations, especially to his lower body, because when you mix mostly unoxygenated blood with mostly oxygenated blood, well, you know how averaging numbers works.

On the other hand, he still has the hole between his femoral artery and vein on his right side.  The artery above the hole has dilated significantly, which made repair in the lab not safe.  In order to put in a patch big enough for the upper part, it would have probably torn the artery below the repair.  Kinda not a good thing...  So our cardiologist is going to talk to general surgery and vascular surgery and we'll go from there.  But that's a conversation for another time. 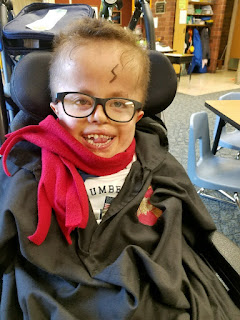 On the positive side of things, he's looked really good for the past couple of weeks.  He was as optimal as he gets going into the procedure.  This morning he woke up happy and we'll just take it from here.  The plan is to go home today but we'll also see what today brings.  For now, he's in a good place and ready to move forward.

After all, he is the Boy who Lived.

"We’re all human, aren’t we? Every human life is worth the same, and worth saving." — Kingsley Shacklebolt. Harry Potter and the Deathly Hallows

Posted by CompatibleWithJoy at 9:13 AM