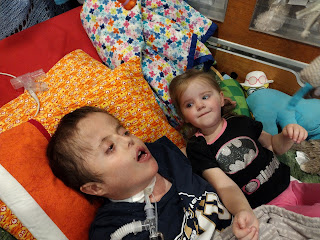 We had planned to be raising puppies this summer.  That turned out to not happen, so we went with other projects.

Some on the house, some medical.  Because, of course, why not?

Anyway, we've got an upstairs bathroom that was a little rough when we moved in.  Almost 20 years later,
it was way past time to fix it up.  I LOVE my new light, and frankly, designed the rest around it.  I mean, isn't that what you're supposed to do? 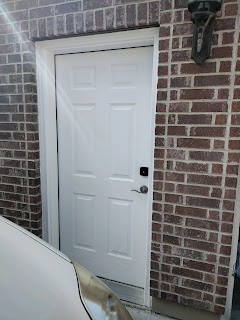 Then we got a new lock for our garage door.  Almost no one uses the front door.  We all go in and out the garage door, and the nurses use it too.  Putting a combination lock on it meant that everyone has their own code and it's locked all the time.  But then I got to looking at that door...  Yeah...  Apparently my kids (when they were little) thought it was way cool to use their bikes and scooters to "open" the door by popping wheelies and such.  And the door showed it!  Framing coming loose, dents and scrapes on the door.  It was UGLY!  So I spent time scraping and repainting and reattaching all that.  I forgot to get a before pic, but after looks pretty awesome!

And then there's the general clean out of "stuff" that I've kept through the years because it would be "needed" someday, or someone would grow into it.  I finally figured out that if none of the older kids were going to wear something, it stood to reason the youngers wouldn't either, but it took me a while.

So those are the home projects, and I'm almost done for the summer.  Not that there's not a lot more that needs to be done, but frankly, my summer time is coming to a quick end.  Because you know the medical projects. 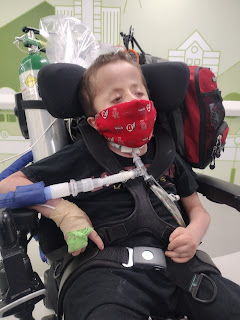 Aaron is currently in the PICU again, but this one was planned.  He's switching to a new ventilator and so far it's looking AMAZING!  He's doing really, really well!  Not sure how long we'll be here.  Apparently this stay is driven by the insurance and it will depend on how much time they say he needs to be here for observation.  I've got fingers crossed for 48 hours.  24 would also be nice.  Really hoping it doesn't end up being the 72.  And we're still trying to figure out who can repair that hole between his artery and vein in his right groin area.

Then there's me.  A few days before his heart cath I woke up about 1:30 in the morning in significant pain near the bottom of my ribcage.  I tried for about five hours to talk myself out of it, took antacids, Tylenol, tried different positions.  Nothing really worked.  About six, it became hard to breathe because it hurt so bad so I gave up and woke William.  The good news is that it wasn't my heart, which is what I was afraid of.  The bad news is that. they think my ulcer may be back and I also have gallstones, one that's especially big.

So lucky me, I get to have my throat and stomach scoped in September, and I'm having my gallbladder out on Monday.  'Cause isn't that what everyone wants to do during summer?  Frankly, I'm feeling fine!  But the doctor warned me that if I chose to wait until I didn't feel "fine" I would end up really sick.  So I guess I'm doing this on my schedule instead of my gallbladder's.  The good news is that I'll be mostly recovered by the time school starts again.  The hard part is I can't lift anything over 20 pounds for four weeks.  Yeah, Aaron left that one behind a LOOONG time ago.  And because I have never figured out how to sit back and tell people how to work without jumping in, that means that any projects around the house have to be completed before Monday.  I guess that's okay.  We did get a lot done, and learned a lot in the process.

School starts again in a few weeks and I can't wait!  I've needed this break, this time to not focus on the academics, but I'm ready to get going again.  Part of self-care involves changing things up

You must learn to make the whole world your school.
~Martin H. Fischer
Posted by CompatibleWithJoy at 6:37 AM