I Stand for Good Days 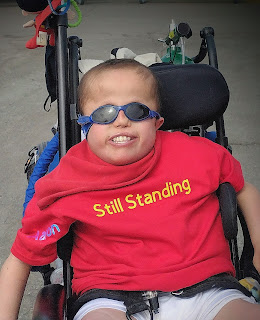 School is ending which means end-of-year activities.  Field Day, graduations, concerts and dance festivals.
Dan Peterson School has a dance festival each year.  Each class dances to a short song.  There's a Sno Cone truck.  Pretty fun!  If you want to see movement with enthusiasm, these kids have it!
Holli warned me that I would cry.  I didn't understand.  I kinda got an inkling when I realized his class was dancing to "Still Standing," but even then, I didn't understand.
As the kids came out, they each had a big sign with "I Stand For _______."  "Music."  "Achievement."  "Me."  Aaron's was backwards, which I thought was a little odd, but whatever.
And then he came forward and Holli turned his around.  Somehow, I suddenly couldn't see clearly.  "I Stand for Good Days."  Good Days.  Yeah, we haven't had a lot of those lately, but that's what he chose.  And it was his choice.  They didn't choose for him.
This kid.  With all he's been through, all he's going through, he stands for good days.  What an attitude.
Frankly, I think there have been more bad days than good lately.  But him?  He's still standing, still smiling, still reminding me to keep going.
Aaron saw cardiology on Monday.  It didn't go well.  While both sides of his heart continue to squeeze well, the right side has gotten quite large and is also much thicker before.  Increasing muscle size?  Pretty awesome for biceps and triceps.  Not so much for the heart.  It's being overworked. 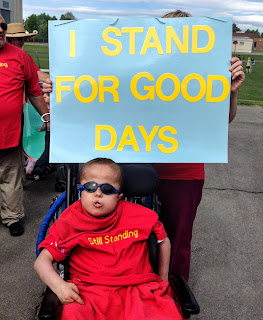 Somehow the VSD has started closing.  This would have been great in the beginning, but now it's needed for pressure release.  His doctor wants to try to change one of his meds, hoping that if he takes it through his g-tube instead of inhaling it directly into the lungs it might be less irritating.  He also wants to consider doing a heart cath, possibly repairing the hole between his right. femoral artery and vein, and maybe widening his PDA.  That's a duct between the pulmonary artery and the aorta.  Then that could act as the pop-off valve he's needing.
But Aaron doesn't play nice with anesthesia anymore.  It gets into a brawl with his asthma and pulmonary hypertension and no one comes out a winner.  There's also a risk of the hole rupturing during the procedure which would be catastrophic.
On the other hand, he's not doing great most of the time now.  He's tired.  He's still fevering off and on. He's starting to retain fluid in his belly due to the congestion in his heart.  We don't know what the "right" answer is.
Years ago, when a dear friend told me her daughter was "done," she told me they realized they were doing "to" her and no longer "for" her.  We want to do "for" Aaron for as long as it helps him, but have no desire to torture or do "to" him.
Last week when he was struggling, we saw his pediatrician.  I knew if I took him in, they'd admit him.  But if there's nothing that we can do, I don't want to tie him to a hospital bed, and his ped can order the labs and x-rays needed.  Nothing jumped out, so we just continued maintaining at home and letting him go to school.  And to his dance festival.
We haven't given up.  He also has shown signs of food intolerance regarding his formula.  For the past two years, he's had formula five days a week and blended food twice a week, at least up until he got so sick.  Then for several weeks, it was just the formula.  Knowing he does better with real food, we've gone back to blending full-time.  It can take up to two weeks to clear that out of the body.  I'm hoping that will help.
But the reality is, we just are not sure what to do.  So we're turning to the One who does.  He loves Aaron, even more than we do, and He loves us, too.  On Sunday, we're going to hold a family fast where we ask for healing, for guidance, and for strength.  We would love to have as many people who are willing to storm heaven's gates, praying for Aaron, for us.  We know miracles are real.  We've seen them, felt them.  We also know that sometimes the miracle that comes is not the one we're hoping for, but it does not make it any less miraculous.
We've had almost 12 years with our sweet boy, and frankly, I'm greedy.  I want more.  But what we really need is clarity and guidance and comfort.
And through it all, we'll still be standing for good days.
"Howbeit this kind goeth not out but by prayer and fasting."
Matthew 17:21

Posted by CompatibleWithJoy at 5:36 PM