Learning to Be Still 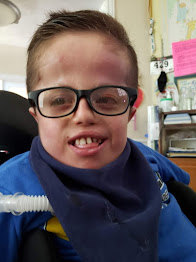 I'm not sure how it's been so long since I've written.  Maybe it's because I've been struggling.

When I last wrote, I was in quarantine.  As I expected, my test results came back negative, but it was a huge wake-up call to me.  There was no way I could go back into the public schools. 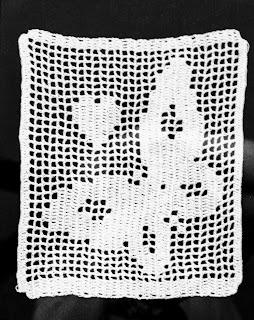 And in July, we lost two little boys whose moms I'm close to, on the same day.  One, little Joseph, had full T18 like Aaron.  I've been with his mom and dad through several hospital stays and we've met up in person at picnics and parties and such.  He was fine, and then he was gone.  It was such a blow!  I'm still trying to wrap my head around it. And with the pandemic going, I couldn't even attend the funeral, although I went down to visit Becca the week before.

So I'm no longer a sub, and that has been hard.  I keep saying how much I miss my students, but it's simply not safe.  It's not safe for the kids or for the teachers either and yet, here we are.

Our schools have chosen to open with what appears to be very little intervention.  Besides masks and getting out an hour early (which means that for secondary students they're not eating lunch at school), not much has changed.  The classrooms are still way overcrowded and so are the halls, and that is from a pre-pandemic perspective.

We went back on forth on whether or not the boys would go to school.

Wanna hear something funny?  The one I'm not worried about at school?  Aaron.  Yeah, him.

His school is taking huge precautions.  He even has his own "tent" that he'll be in if he needs any cares, including suctioning with a closed system and his nurse and everyone in there will be in full PPE, like at a hospital.  And it's his, as in no one else will use it.  All equipment is student assigned, and is cleaned each evening by someone in gloves.  Masks are a given.  Very few students in the room and they temp check and record everyone entering the building for any reason at all.  Earlier I had to take a piece of equipment over and drop it off and I got temp checked.  Yeah, they're pretty much doing everything they can.

Then there are the other schools.  I get it, there are waaaaay too many students to do that with, but I felt there were other things they could have done.  We considered keeping them home, but the online options were pitiful at best.  Michael is on an honors track and Andrew has 4 AP classes plus German 3.  I don't see their education going well without significant support which wasn't available.  So they're in school, in person, at least for now.

But the routine we have going is somewhat detailed.  Andrew drives to school, a privilege he can 100% credit to Covid.  No way I want him on a bus.  He drops Michael off at school on Michael's early day and picks him up each day as well since we're also not carpooling.   When they get home, shoes and backpacks go on a shelf in the garage, they go to the laundry room, put masks in a laundry bag, strip and put clothes in the washer, put on a robe, shower, and then put the robe in the washer, too.  They also wash hands after disrobing and before leaving the laundry room.  Masks either have filters sewn in, or have filters inserted to make them more efficient.  They have water bottles with straws so they don't have to take off masks and their own sanitizer.  I've done everything I can to try to keep this out of our home, but they also still have to live a life.

I've had people ask why we're send them to school, sending Aaron.  Well, the fact is we didn't save Aaron's life to just exist.  We still need to move forward, experience things.  I don't like this.  I really don't.  But I do believe that we can rise to the occasion and do what is needed.  Yes, I do believe masks work.  I've taken care of Aaron for 10+ years through countless colds and two bouts of flu, including one that I developed two different pneumonias after.  And he didn't get them.  I wore a mask each time and was diligent in washing.  Can they fix everything?  Nope.  Does it get riskier the longer you're in contact?  Yep.  Hence the danger of schools.

Anyway, that's kinda where things are.  I'm now working from home for AAA, and it's going well.  It's an intense learning curve, but I'm making it happen.  I miss the students, but I'm still helping people.  I did a completely crazy thing last weekend.  One pandemic puppy wasn't enough, so now we have another.  I have always wanted a little poodle, and now we have Sophie.  She's soooo funny, and so different than Simba in basic personality.

Simba is a great dog, but he's actually somewhat shy and timid.  Not around us at all, but hesitant with new situations.  When we got him, he was so stressed that he was really sick for about 24 hours. 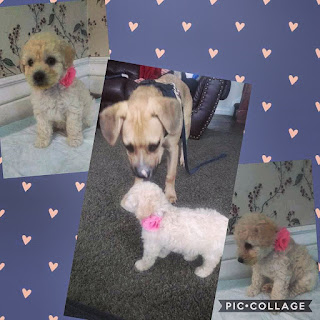 Sophie?  Not so much.  I didn't do the math until we were on the way home, but she was just 5 1/2 weeks old, actually too young to leave her mother.  She didn't even have the teeth to really chew her food, and I couldn't find the kind of food they'd been giving her, along with her mother's milk.  I have to admit, when I put it all together, I was more than a bit worried.  No need.

I did have to moisten the puppy food I picked up for the first few days, but she didn't seem to care.  It;s food, just give it to me!  She slept through the night almost from the beginning, and treats everything as if it's an adventure.  She was only just over 2 pounds to Simba's 35+, but was thrilled to take him on.  The first couple days, he wasn't so sure.  He'd whine and back up and be very subservient to her.  She just wanted to play.  He's gotten over that, and we do have to intervene in their playtime periodically because he's so much bigger, but they get along well.

So that's where things are in the Peterson house.  Aaron loves petting Sophie, both dogs seem to know they need to be gentle with him.  He's thrilled to be back in school.  We've got a couple new nurses that I'm hoping will work out well.

And we're trying to hang in there.

A couple weeks ago we sang "Be Still, My Soul" for home church and it really spoke to me.  I was anxious and irritated, very much bothered by what was happening with our schools and the danger I feel is coming in opening the way we have.  But I was  reminded that He is in charge.  I need to do what I can, but then leave the rest to Him.  I have done my part, I believe.  I've taken a job that has removed me from the schools.  I wrote to the governor, my representatives, my school board and the state school board.  We have put in place "decontamination" measures for coming home from school.  And my boys need to keep learning.

I have done what I can.  Now I need to leave it in His hands.  That's harder to do than it is to say, but it's what my soul needs. 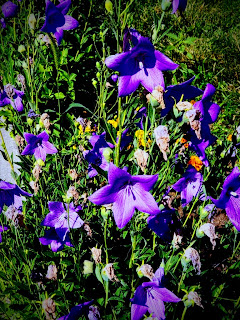 I need to be still and know that He is in charge.

(And I also need to do another pandemic video.  Maybe next time.)
Posted by CompatibleWithJoy at 1:02 PM