Trying to Increase the Baby Steps 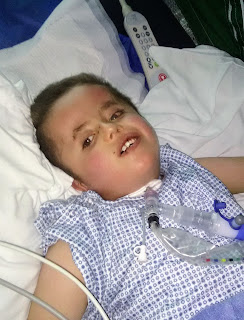 Still here, still slow progress.  Today the team decided to go ahead and try a blood transfusion.  Yeah, we thought we were going to do that a few days ago, but no intervention is ever without risks, and they really wanted to see if he could recover on his own.

But yesterday there wasn’t much progress.  I mean, there was if you look at stability.  We didn’t have the wide swings in oxygen that we’ve had, but he also still needed the same amount, we weren’t able to break below 55%, and it was still usually 65-70% oxygen.

So today we added in more blood.  The thought is that if he’s got more “boxcars” (blood cells) to carry that oxygen around, his body will do better, because no matter how much oxygen you pump into someone, no blood cell can carry more than 100% oxygen.  So more cells means more oxygen.  At least we hope that’s the way his body will read it.  It worked several years ago. 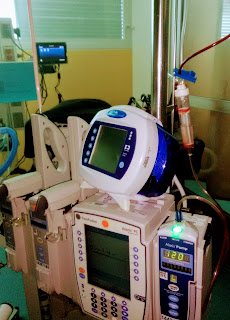 And shortly we also hope to transition back to his home vent, when they get some time around here.  In spite of the “season” winding down, it’s still pretty busy in the unit.  Lots and lots of kids needing special care.

Aaron is in pretty good spirits.  We had about an hour last night where he was very upset, crying, which is not like him at all.  It was heartbreaking to hold him as he sobbed.  We don’t know why, maybe the steroids, maybe he’s just done being here.  But his happy smiles are back, and he’s spent the day watching movies on the TV, and scrunching his face and trying to see past anyone who blocks his view.  How like a kid is that? 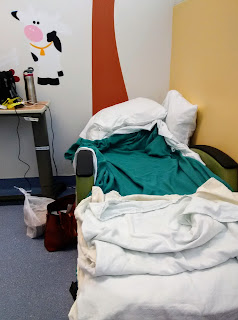 All things working the way they’re supposed to, I’m hoping for home tomorrow.  I’d really like to exchange this bed for mine at home. Hoping...


“It’s a long road, so we are just trying to stay focused and grounded and keep moving forward.  I’ll take it, though.”
Sturgill Simpson
Posted by CompatibleWithJoy at 4:15 PM