How has it been so long?  I keep having these thoughts racing round and round in my mind, and thinking, "Oh, I need to write about that."  And then I don't.  Something about work and kids and just life, you know.

It's been a busy month, but (mostly) in a normal, regular life type of way.  Two weeks ago, he was acting "off."  It went so far that one Tuesday at school, he was crying and had a low-grade fever.  I was a little concerned, but not much.   I know, right??  My kid crying with a fever and I'm not wigging out!  But I looked at what he'd been doing, great oxygen when upright, not so much in bed, not sleeping well, fussing with his trach ties, and wondered, ear infection?


So I called his ped.  They didn't have any appointments available (funny how that happens when you call about 4 pm) so they put me in after hours.  We went, they were behind, we waited our turn!!  Again, who'd have thunk??  And yep, kiddo had an ear infection.  We went to the pharmacy, waited again, got that pink bubblegum medicine (too bad he doesn't taste it) and went home!!!!  You know, like a normal kid!

I know, I know, waiting isn't fun for anyone.  Except, sometimes, it is.

You don't wait when your child isn't breathing.  You don't wait when oxygen sats are dropping.  You don't wait if there's a possibility of things going south really fast.  Then it's all hands on deck.  I've been there as they've called a "red patient admit" to the ER, and it was us.  I've been there as they've called "rapid response" to his room, too many times.  I've taken that phone call when I've stepped away from the hospital briefly that begins with a deep breath, and they tell you what has gone down (and down is the right word).  Yeah, not much waiting there.  So waiting?  Yeah, it made me laugh, and almost cry.

He's doing well on his seizure med, we think.  Still seeing a few here and there, and wondering if I'm missing some.  See, they're pretty short, usually less than a minute.  But they also wipe him out.  The good thing is we haven't had to use his "rescue" med.  They've stopped on their own. 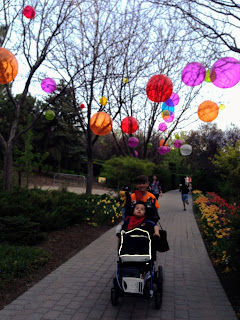 He's also been a bit of a punk from time to time.  A couple weeks ago, he threw a plug while I was gone.  Dad and Andrew worked on him, bagging him and suctioning while I raced home.  And Aaron?  Well, he may have a career in plastic surgery someday.  Dad is trying to save his life, and he's trying to remove Dad's nose, pull his hair out, and basically laughing at them.  Crazy kid!  I mean, who does things like that when they aren't breathing well?  My child, apparently. 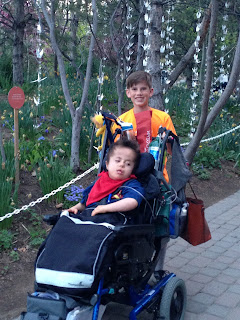 Then last week, my niece graduated from BYU.  To celebrate, they invited family to come to the Gardens at Thanksgiving Point for the Tulip Festival.  Inside is a section called "Light of the World."  I have never seen this.  A beautiful rendition of scenes from the Savior's life, it was exactly what my soul needed.


Sometimes, things are hard.  And often the hardest times come when life is just flowing the way it's supposed to.  When we're not in crisis, I have time to think, to ponder, to try to make sense of things.  I'm reminded in small ways, and big ways, of the fragility of this life.  This week a girl, just shy of her 37th birthday, passed away after living a joyful life with T18.  Two weeks ago, Georgia was laid to rest.  Emilee and I sat and cried side by side at too many funerals, and then she was the one up front, while I was in the back.  It still isn't quite processing, and she isn't even my child.

But this evening in the Gardens, I found comfort.  The beautiful flowers were wonderful, and awe inspiring.  But as we entered this space, where there aren't many flowers, it's almost entirely xeriscaped, the first image was one from Peter's perspective after he's left the boat to try to walk to Jesus on the water, only to lose faith and sink.  And I was reminded, my Lifeguard walks on water, and He is always there.  He knows, He understands, and He loves me.  And because of that knowledge, I can find strength.

We'll go on, making as many memories as we can.  Soccer games, impromptu basketball contests between brothers, haircuts and school.  Being silly and sleeping in late.  Trying new things, and even having "normal" experiences like ear infections.  We'll pack as much in to his life as we can, and by so doing, into ours as well.  Fill our cups to overflowing.  Because someday, those chances will be gone, and I don't want to miss out.

"Enjoy the little things in life, for one day you may look back and realize they were the big things."
~Robert Breault

Posted by CompatibleWithJoy at 10:52 AM