Soooo, we were supposed to go home yesterday.  (Notice the words “were” and “go”.). Didn’t quite happen.  We were so close.  We had discharge papers and everything.  And then Aaron decided he wasn’t quite done.  About 1:00, he dropped his sats, and then dropped them some more.  We ended up on 10-12 liters just to maintain 80%.  A rash followed.

Before his transfusion, I spoke with the doctor about what I needed to be watching for as far as reactions.  He told me that the vast majority were skin reactions, and that almost all adverse events would show up within 24 hours.  Um, we were 25 hours since the transfusion started, 23 since it ended, right smack dab in the middle of that magic 24 hours.

I called William and told him I wasn’t sure what to do.  He laughed and said he was pretty sure I did know, I just didn’t like it.  I sighed, he was right.

So we stuck around one more night.

I like to think I made a difference though.  Memorial Day weekend, just like any holiday weekend, is a big deal in an ICU.  There are a lot of traumas, and as I passed our attending in the hallway, she just looked beat down.  I could hear some of the drama she was dealing with, and it wasn’t even just trying to keep kids alive. (I know, some “just”, right?). There were parents who were attacking her decisions, challenging everything.  I know as parents we have to be our kids’ advocates.  But this was common sense things, like they didn’t like staff gowning up to go into their child’s room because it made the child anxious.  Um, your child has a virus (and I know, ‘cause I heard you yelling about it).  Your child is a danger to other kids.  Yeah, it’s “just a cold!”  But that “just a cold” has them in the PICU, and my child, too.  Frankly, it’s not “just a cold”.  Okay, off my soapbox.

Anyway, I had a chance to talk to her last night before she left and tell her I was so grateful for all her help.  I was also a parent who questioned and challenged some of her decisions this week.  She was so grateful for my thanks.  Ironic, she works so hard to keep these precious children alive and get them healthy again, and sees so much grief.  I think as parents, we need to be more conscious of the doctors and all the staff as people, people with hearts and feelings, and often children of their own.  Almost eight years ago she wrote in Aaron’s book about how happy she was to see him doing so much better after heart failure, and that he should go home and be happy and not come back.  Well, two out of three.... 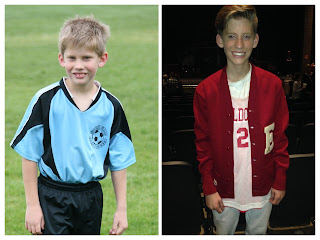 So here we go again.  They’ve pretty much just changed the dates on the discharge papers.  And we should get home just in time for big brother Andrew’s birthday.  Happy birthday, kiddo.  15 looks good on you.


If we are facing in the right direction, all we have to do is keep on walking.
~Buddhist Saying
Posted by CompatibleWithJoy at 11:02 AM