Not Much, But Still, So Much. Life is Good. 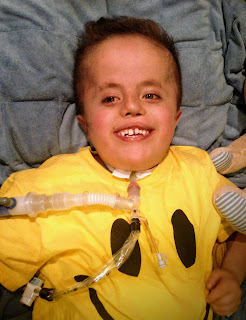 This cute kid has been doing really well!  Unfortunately "has been" seem to be the operative words here.  He's struggled the past few days and I'm not sure why.

Has he caught something?  Right, like that could happen with all the bugs going around, not to mention we had the lovely influenza B right here at home a few weeks ago.

Is it a change in diet?  I ran out of the tofu we've used as a protein source and I started using a protein powder.  I've gone over the ingredients in the powder and really, there's nothing there that stands out.  It's a vegan, non-GMO, no sugar, etc, etc recipe, but still...  Actually, I'm kinda hoping it's this one.  Much easier to fix.  Tomorrow he'll be getting his food without it and we'll do that for a few days to see if that makes the difference. 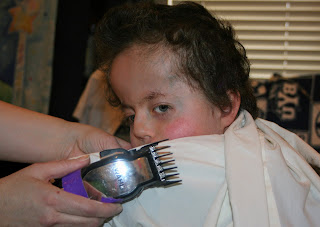 In other news, he got a haircut yesterday.  Yep, he liked it about as much as most 7 year old boys do.  Not at all.  Unlike most of those boys however, he was also afraid of the clippers.  Poor kiddo.  As I flipped them on, he started crying.  But with big brother's help, he managed to get through it, and his bath and then fell asleep.  But the new do sure looks good! 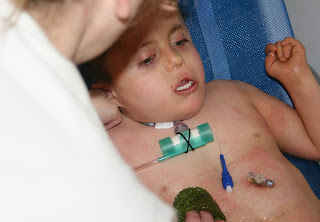 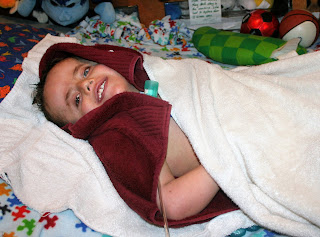 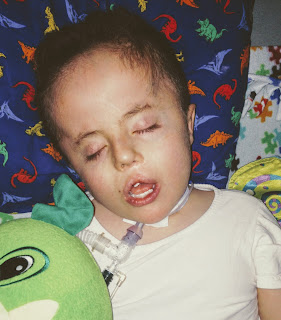 Aaron knows what's going on.  He is very aware of what's happening around him.  A couple weeks ago he was using his talker at school to tell his classmate "good job!" on a presentation.  The next day he announced that he was "tired and grumpy."  And his nurse agreed, but then he perked up in the afternoon.  In fact, it was the same morning after he stayed up until 4 am.  Tired and grumpy?  I can't imagine why. 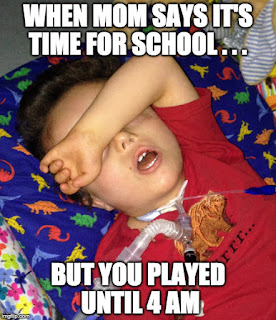 The other day I was talking with one of the boys about maybe learning how to change the trach.  We've always been more than open to teaching any of our kids how to take care of Aaron, but also careful not to push them into something they don't want to handle.  Joseph (17), Andrew (14) and Michael (11) are all very capable of suctioning, bagging, increasing oxygen, feeding, venting the tummy and so on.  But none have ever changed the trach, so I was asking about it.  Joseph and Andrew were both adamant that it was something they really didn't want to learn.  They've helped enough times that if they had to, I have no doubt they'd do just fine, but they don't want that responsibility, and that's okay.  Michael on the other hand, did try once, and Aaron was a bit of a turkey and started trying to do crunches and laughing at him.

So as we were talking, I mentioned that Michael probably would want to do a trach change, and Aaron, who had been lying there watching the exchange, starts nodding his head!  Yeah, he really did!  I looked at him and grinned, and asked him, "So do you think Michael wants to change your trach?"  And he nodded more, and more vigorously!  Michael wasn't around, so later when he was, I asked him, and "of course I want to!"  Aaron knew, he knows his brothers, and he called it.  He knows Andrew and Joseph would do anything to help him, but they're not comfortable with that aspect.  And he knows that Michael wants to do it all. 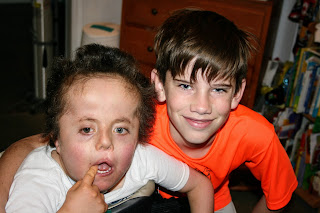 One more note about Aaron and Michael:  Michael's science fair projects have been driven by his need to understand Aaron.  Last year, he looked at barometric pressures and how they influence oxygen needs.  This year he also incorporated heart rates and respiratory rates.  As far as his project went, he noticed that even when oxygen needs didn't change, heart rate and respiratory rates increased.  HOWEVER, he also noted that Aaron has become much more stable over the past year. 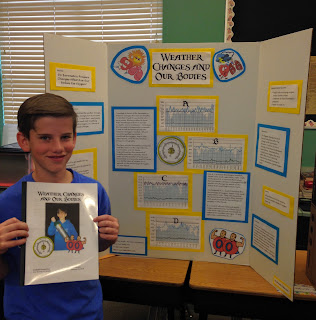 Last year, Aaron's oxygen needs fluctuated much more than anyone else's did.  This year, his oxygen was pretty stable as his heart and lungs were better able to compensate and he didn't use much more oxygen.  And Michael was the one that realized that, not me.  Pretty incredible.

Finally, it's heart month.  But for those who live with a congenital heart defect, every month is heart month.  And sadly, many babies don't ever grow up.  In fact, twice as many children die from CHDs than all the childhood cancers combined.  When a child passes, if they are dressed in clothes, those outfits need to be new.  Understandably, new clothes are not at the forefront of the parents' thinking, and so are often pulled from a closet at the hospital.  Primary's closet is empty.  A sweet friend wants to fill that in memory of her own heart warrior and I'm trying to help.

If you would like to donate clothes (with tags on them), you can send them to her or bring them to me, or send money for them to be purchased.  Her Facebook page is Colton's Closet  and you can read more about her son there.  At the moment, sizes 4T and 5T are needed the most, but everything from preemie through children's sizes are welcome.  It's such a little thing for us to do, but means so much to a parent to be able to dress their child, sometimes for the very first time, before sending them away.


“Awareness is like the sun. When it shines on things, they are transformed.”
Thich Nhat Hanh

Posted by CompatibleWithJoy at 11:26 AM