Smiles are Back! (And Sometimes Mama is Slow...) 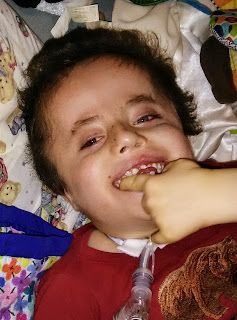 Okay, ever have those times when things are bugging you, nagging at you, but you're not sure what or why or whatever?

Yep, that would describe the past few weeks around here, pretty much since mid-December.

Now, of course, there's any number of things that it could be blamed on.  Rising flu season, Christmas coming, work, kids, you know, LIFE!

Last Sunday morning (a week ago) I was getting ready for church and thinking about Aaron.  I was taking inventory and congratulating myself on getting him off of two (2!) long term maintenance meds over the past month.  His asthma med he'd been taking for over four years, and his reflux one since he was four weeks old, pretty much his whole life.  Pretty awesome!

Until I realized, it wasn't.  Quiet moments are not only nice, they're necessary.  As I sat in the chapel listening to the prelude music, Aaron was restless.  And it wasn't his "this is fun, let's party!" restlessness.  It was more writhing, squirming, and uncomfortable.  He was hitting his head, hard, grimacing, and no way we could coax a smile.  All of a sudden, it all came together, right there.

Coming off the reflux med wasn't a good thing, and he'd been suffering for over three weeks. 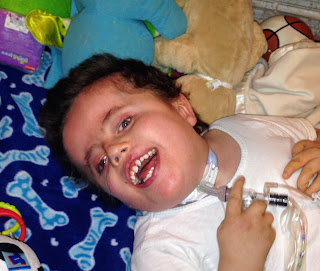 It started off slow, a little less restful sleep at night, not as many smiles.  A little more oxygen here and there.  Oh, I ached for my sweet boy who couldn't tell me what was going on.

As soon as we got him, I gave him a full dose of his medication, and we restarted it at his regular time the next morning.

On Friday I sent the following email to his doctor:


We tried to stop Aaron’s Prevacid after his last visit in December. We gave him a half dose until 12/30 and then stopped. It didn’t work.

When we cut his dose in half, he became less social, less smiley, and less interactive. His sleep patterns are also affected with restless sleep at night and tired during the day. His oxygen needs also increased a bit. At the time, I didn’t connect it with the changes.

When we stopped it, he started needing more oxygen, especially just after eating and while sleeping. Usually those are the times his needs decrease. He had clear lung sounds and no secretions, and no other obvious signs of illness. His last feeding is at 10pm and he gets water overnight from 11 pm to 5 am. By Sunday, January 7, he was visibly uncomfortable, especially right after eating.

I restarted his Prevacid on Sunday, January 7 and we have seen much improvement. He is smiling a lot again and his teacher reports that he is interactive and attentive the way he was before we tried to decrease the med. He is sleeping well at night again. His oxygen needs are not quite back to baseline but they are better, and the patterns have returned to the way they were before.

I don’t know if we want to just keep him on the Prevacid or try Zantac. Please let me know.

She responded quickly that this was a "pretty significant response" and we'd just keep him on his Prevacid. 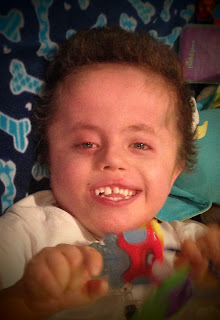 My poor baby.  Two months ago my doctor diagnosed me with a "probable ulcer" (I know, what took me so long, right?) and put me on Prevacid. You know, it hurt!  My stomach ached pretty much all the time, and especially after eating.  It took several days of medication to make the pain go away, and I'm a bit leery of what's going to happen when I stop taking it in another month.  No wonder he wasn't smiley!

But he is now.  And that nagging feeling gray cloud feeling?  Yep, it's pretty much gone, too.

I’ve never seen a smiling face that was not beautiful.
~Author unknown
Posted by CompatibleWithJoy at 10:05 AM