Merry Christmas, Happy New Year, and All That... 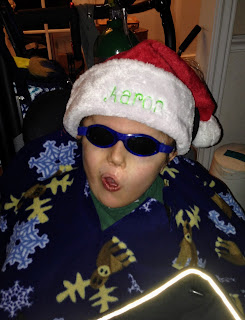 It's been quiet around here, peaceful, mostly.

I'm feeling grateful, and a little bit of survivor's guilt, but mostly grateful.

Christmas came and went without (medical) fuss.  Oh, there was a lot of other "fussing."  You know, cooking, cleaning, declaring that I was completely done, finished, not going anywhere until after Christmas, and then making three more trips to the store anyway.  (And that was ME going, not the times I sent someone else.) 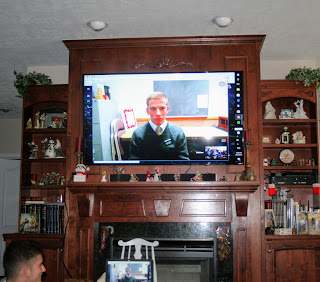 But there were smiles, bright packages and tons and tons of goodies to eat.  Plus all my kids, minus one, under my roof for almost 72 hours.  Matthew wasn't here.  He's serving a mission for the Mormon Church up in Toronto Canada, but we were able to video call with him on Christmas day, so there was that.  For those brief moments, we had everyone together, and it was so good. 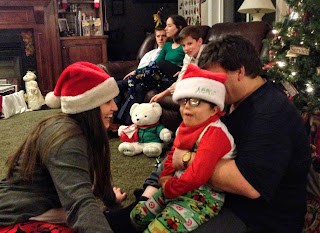 And Aaron is completely turned around in his sleeping.  It's a bit of a struggle for him as he tries to stay awake during the day, and tries to sleep at night, but mostly he's happy about it all.  Of course, his siblings are similar.  I saw our first one up today about 10 am.  It's now almost 11:30 and the other two are still sleeping hard!  Wednesday morning return to school is going to be painful to say the least.

I know I've mentioned before that there is some definite PTSD going on with me.  Actually, it's more Persistent Traumatic Stress Disorder than Post, and that's a good thing.  The only way to get to the "Post" part is for Aaron to not be part of this life anymore.  Most of the time we just sail along, no problem.  Yep, there's diapers and feedings, cares and suctioning.  Meds, LOTS of meds, but whatever.  It's what we do, day in and day out and it's just part of the routine. 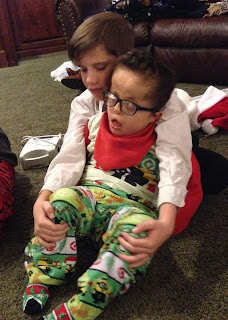 But some of you may have seen the post on his Facebook page a week or so ago where I referred to an emergency on the 18th.  For those who are curious, here are the details, in as much color as I can stand to rehearse.

The Lone Peak Band played their Christmas Concert on Monday the 18th.  Joseph, band geek that he is (and so proud of him!) was actually playing in all three bands.  He's part of the upper two bands, and the director often has kids from those play with the beginning band to help round out the sound as they're a very small class.  Concert started at 7 pm and our nurse was scheduled to come at 6:30.  No problem, that works great.  Until it didn't.

At 6:25 Aaron started dropping his sats, and pretty dramatically.  I put him on his big tank for the first time in a long time.  12 liters, and nothing was happening.  When he's off oxygen (usually due to Mom forgetting to turn it on) he usually settles with blood oxygen saturations in the low 70's.  If he's struggling, it might be high 60's.  Those are pretty ugly numbers, really.  And even on 12 liters, Aaron looked like he wasn't on anything at all.  We began bagging him, forcing 100% oxygen into those lungs and he improved a little bit, to the mid-70's.  His nurse arrived and I turned him over to her while I stepped away for just a minute to return something to the kitchen.  As I was in the other room, I realized I could hear him vocalizing, a lot and loudly.

Now, Aaron often does this, but not quite as loudly, and only when he's doing well. I quickly noted that he was pushing way too much air up and past his vocal cords, which meant it wasn't going into his lungs. But I had suctioned, a few times, and the catheter passed easily through the trach and really didn't pull anything out.  However, regardless, the oxygen obviously wasn't reaching down into his lungs and then to the rest of his body.

Coming back in, I announced we were changing the trach and quickly.  Grabbed his already set up emergency trach, his nurse stopped bagging as we pulled out the one in him and rehooked him up to the new one that I popped in.  Examined the used trach and yeah, it was clean, totally clear, not the problem.  Except in the few seconds that he had no trach in, he coughed hard, two or three times.  We immediately suctioned him and pulled out three big, yellow plugs. 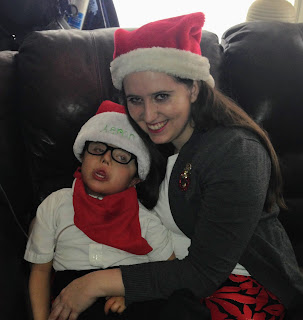 Those plugs weren't in the trach.  They were down lower, somewhere.  We couldn't get them with the suctioning we were doing.  His sats popped up immediately.  He settled down and went to sleep.  I made sure I had the spare key to the car Joseph had taken over and we left.  Except I couldn't hardly leave. 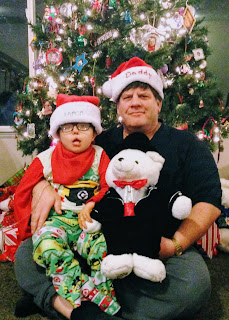 I was completely torn.  Aaron was looking just fine, absolutely perfect! We'd turned his oxygen way back down and he was satting in the mid-90's.  He couldn't have been better.  And there was Joseph.  He's a senior.  It was his last Christmas concert.  I needed to be there, too.  We were a few minutes late, had missed the opening number for the beginning band.  And I sat there and cried and tried not to throw up.  I kept checking Aaron's camera, only to see him still sleeping peacefully, numbers exactly where they should be, and his nurse watching him like a hawk. 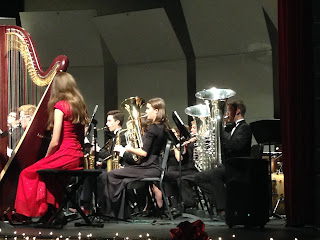 As the concert progressed, the music worked its magic on my soul.  I calmed, I found peace.  By the time the beginning band was done, I had stopped crying.  As the Symphonic Band played "Veni Immanuel" the words played through my mind, "Oh Come Emmanuel, and ransom captive Israel," I was soothed.  Wind Symphony's "All is Calm" recalled that there was peace to be had.  Mary knew that grief and pain would come, but that night, that Holy Night, it was calm.  I was reminded Who it is that is in charge, and that He loves my son even more than I do, and He loves me, too.  What a blessing to be so cherished.  He knows our days, our hours, and they won't be numbered less. 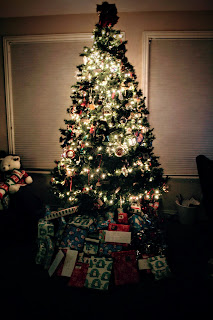 "Christmas… is not an external event at all,
but a piece of one’s home that one carries in one’s heart."
– Freya Stark
Posted by CompatibleWithJoy at 12:51 PM