I have NO idea what this kid is up to. 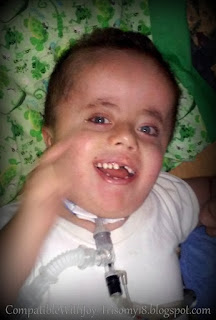 Yesterday morning when he woke up, he was "off."  His eyes looked sad, he had a clear runny nose, but no color.  We also suctioned him a bit more than usual, which means we actually needed to suction.

And he wasn't his usual happy self.  His nurse also told me that there had been a kiddo in the class the day before with a snotty nose and cough, but since he stayed on one side and Aaron was well away, they thought it would be okay.

I was not okay.  I told his nurses (he had two as one was shadowing/training) that if the child was there again, Aaron needed to come home.  And to go ahead with albuterol if he was struggling with sats, etc.

Just before 11, I got a call.  He was pretty junky, they'd already given albuterol, and he just wasn't himself.  I decided to go get him, and yes, I was irritated and on edge.  (Sorry to anyone who had any contact with me yesterday.)

Get him home, try to make him comfy, call the office and arrange to have files I can do if we end up at the Hotel on the Hill (Primary's) and wait for it.  And Aaron?  He goes to sleep.

And sleeps, and sleeps, and sleeps. In fact, I was going to schedule his albuterol instead of waiting for him to tell me he needed it, but he was so sound asleep I didn't want to disturb him.  Like low 70's heart rate asleep.  (FYI, that's about as low as his EVER goes.)  And it went on for hours!

And he woke up happy, and not needing quite as much oxygen as usual.

But then, he went to sleep pretty early again, he was agitated during the night, and slept quite late this morning.

I'm not sure what's happening here.  I mean, if it was me or one of the older kids, I'd totally expect it.  Especially my college and high school kids.  Those guys not only burn the candle at both ends, they often use the middle, too!

I'm holding out for it being a growth spurt. That sounds like a great option.  But whatever it is, we'll just work with it.  If he looks good all day, he'll probably go back to school tomorrow.

And his newest, latest trick is one I would have been happy for him never to have learned. 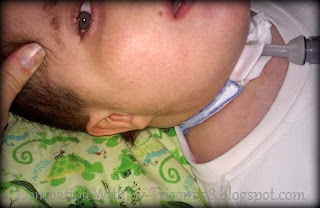 Aaron's trach is held in with trach ties.  A simple thing, a piece of soft material that hooks into the holes on each side and secures with some really tight velcro.

Except that twice within the past couple weeks, he's managed to somehow undo the right side and pull it loose.  Really, kid?  Are you trying to give me a heart attack?  I mean, it's only your airway, no biggie, right??  Both times I managed to discover it before he decannulated (took his trach out of his airway), but seriously, can't we work on a different skill?

In other news, there are some exciting things hopefully on the horizon with Make A Wish.  Everything's still in the preliminary stages, but it is moving forward.  This has the potential to really improve Aaron's life.  If you want more information, or to be involved, please contact me privately.  The more the merrier, and many hands make light work, you know how it goes.  When it's ready for public knowledge, you know I'll be shouting it out, though!

Anyway, I'm thinking that perhaps I should have taken ballet as a child, 'cause Aaron sure likes to keep me on my toes.


Posted by CompatibleWithJoy at 11:42 AM