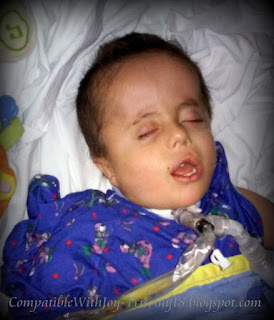 He's FINALLY sleeping.  This kid has been having a party since he got here.  Like, he'll sleep for an hour or so, and then play for several more!  Until last night, he probably only has slept about eight hours since we got here Friday morning.

And when he's awake, or tired, he uses more oxygen.  Once he was sleeping soundly, we made good progress.

He woke briefly this morning when his nurse did his food and his medicines, played for a couple minutes, and is back out again.  I think he may sleep most of the day.

We're also probably going to the floor today.  He's on his oral antibiotic instead of IV.  It looks like our old buddy, pseudomonas, has gotten out of hand.  He's been colonized with it for years, but every so often, it gets out of control and causes problems.

So now we just have to get his oxygen under control and everything should be good.


Sleep is the golden chain that ties health and our bodies together.
Thomas Dekker
Posted by CompatibleWithJoy at 9:26 AM