Hotel on the Hill 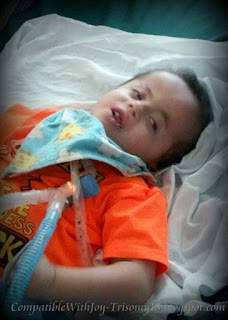 After posting yesterday morning, I put in a call to the hospital.  I was just really worried and was trying to decide if there was more to things.

Our trach ninja felt like he needed to be evaluated.  She also felt like if it was just viral, we were still probably in an okay place at home.  But especially since he'd been sick ten days earlier, there was the chance it had turned into something bacterial. So we loaded up and drove on up.  And yep, good call.  There is something bacterial going on.  We're not quite sure exactly what, but they're looking into it.  His white blood count, those infection-fighting cells, came back pretty high (24 with a normal range of 5-15) with a significant left shift.  That means that the bone marrow is not only producing a large number of white blood cells, but it's also releasing them into the blood stream before their fully mature so they can get right to work.  Isn't our body incredible the way it works?

But that also meant that staying home and giving more breathing treatments wasn't going to work.

His x-ray showed some white patches in the lung behind the heart, so it may be a pneumonia.  That's what they're leaning towards right now.  My money is also on the trach cell sample growing out something nasty.

But one way or another, he's up here at his vacation home getting the help he needs.  He's on IV antibiotics, a fairly broad spectrum one until we can figure out exactly which bug to target.  And he's on their ventilator, which means we're in the PICU.

Once again, someone forgot to tell him he's sick.  He figured since he was on vacation, he ought to party. This morning his nurse asked if I slept okay.  Yeah, pretty good for the chair/bed and PICU.  But apparently he didn't.  He played until 4:30 a.m., which means he'll be sleeping all day.

My silly bug.  So grateful he can get the help he needs.


At some time in everyone's life, we all start needing a little help.
Jim Robbins
Posted by CompatibleWithJoy at 9:55 AM