We Don't Do "Boring" 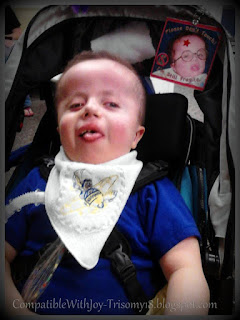 Aaron's heart cath went well on Monday.  From start to finish, it was pretty smooth.  The goal was to leave by 5:00 a.m., and we pulled out at 4:59.  They took him in on time, he got out a little early, and except for the part where he forgot to read about lying still for six hours (yeah, like that was going to happen), everything went according to plan.

His results weren't what we hoped for, but they also weren't what we feared.  Out of the four areas that were the focus, one was the same, two were slightly better, and one was slightly worse.  I guess we'll take it.  Not much other choice, right?

And that brings us to today, 'cause you know, we just don't do boring around here, at least not for very long.

I'm not sure why, but I was having the hardest time keeping my eyes open today.  I do transcription for my job, and I was sitting here typing, trying to stay awake, and finding myself typing with my eyes closed.  Hard to maintain much accuracy when the brain is shutting down along with the eyes.  So I finished up and planned to go take a nap.  Matthew was all set to watch Aaron.

Just before I went in, he started in with some "high inspiratory pressure" alarms.  It's not one we see often, and I tried to suction him, and got nothing, so I went to look it up.  As I was doing so, Matthew called that he was desatting and starting to cry. 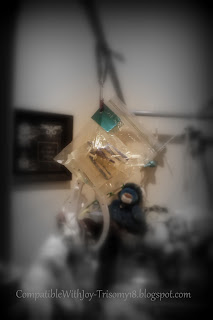 So I went back in quickly.  Suctioned once more, again NOTHING, and he started sounding really bad.  Like gasping for breath bad.  I told Matthew to crank the oxygen up all the way and grabbed his spare trach from over his bed.

Aaron looked terrified, and as I glanced at the pulse ox, I saw his heart rate jump.  And it wasn't just a bit of a skip.  He was 210 to 220 beats per minute.  Let me tell you, I don't think my heart rate was much behind it.

By this time, William was in the room too, and I yanked that old trach out, we got the other one lubed up, and after a couple of tries, managed to place it.  (It was harder because since he was upset, he was all tense, which made the stoma, the hole the trach goes into, tighter and smaller.)

As soon as we got it in, he relaxed.  In fact, within a few minutes, he was on his way out for a nice nap of his own.  I took a look at his old trach though and felt sick.

Inside was the biggest, thickest, stickiest plug I've ever seen.  The reason I wasn't getting anything was that it simply wasn't moving.  He couldn't breathe.  Nothing was going in or out.  And while he slept, I tried to quiet all the "what ifs" going around my brain.

See trach plugs are a very, very real, and not uncommon, threat to trach kiddos.  Same principle that says, don't let toddlers play with small objects.  And that's why everyone who takes care of Aaron on their own has to be able to change a trach at a moment's (or less) notice.  But the other part is recognizing when it needs to be done.  And sometimes that's tricky.

So I remind myself again, my Heavenly Father knows him, knows his needs, and knows his days.  He's been promised more than once that he will be with us until his purpose on this earth is finished.  And I will try to trust God to hold us up.  And go snuggle my little man as much as I can.  (And maybe find some chocolate.)


"Trust in the Lord with all thine heart; and lean not unto thine own understanding.  In all thy ways acknowledge him, and He shall direct thy paths."
Psalm 3:5-6
Posted by CompatibleWithJoy at 10:18 PM