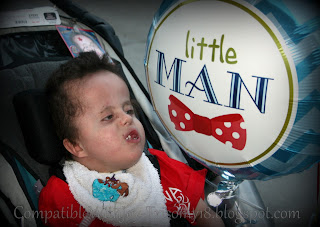 Five years ago, Aaron was born, and he's been showing us how to do hard things ever since.  Yesterday, I did my first 5K (nope, didn't run, but I did make it).  It was hard.  I'm not in shape and was pushing a 150 pound stroller for half of it.  But I figured if he can keep going, so can I. 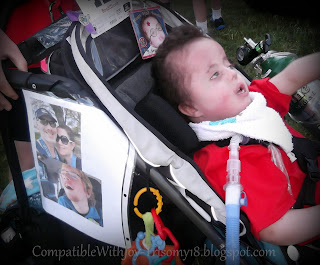 We brought some friends along with us, virtual runners, who've helped out.  Aaron has a runner who runs for him back in New Hampshire.  I put her picture on the oxygen tank.  Somehow, it seemed appropriate! 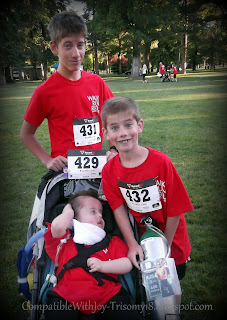 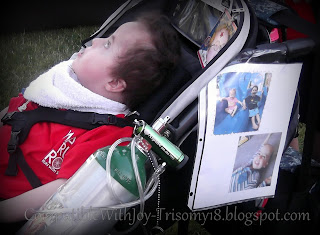 But you don't get anywhere on your own in life, and that was true for yesterday, too.  The 5K was two laps (plus a little bit) around Liberty Park in SLC.  My boys (who are in shape) of course lapped me, quite easily.


As I was approaching the end of the first half, I considered stopping, or at least dropping Aaron off with one of his brothers.  But he was enjoying it, and I didn't want to be a quitter.  On the other hand, one hip and one knee were starting to "speak" to me, and they weren't sounding very polite.  So I asked for some help. 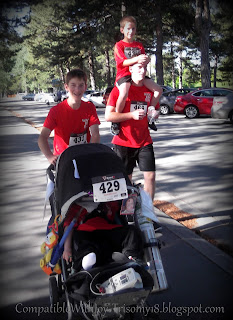 Joseph, who had just finished, came.  Michael (9) had run the first lap and decided he was done.  I didn't want him to give up, either.  So I cajoled him into coming along, too.  Joseph pushed Aaron the rest of the way while Michael and I walked along.

About 3/4 of the way through the final lap, Michael simply was "done."  David came and met up with us, and hoisted his younger brother up on his shoulders.


And with Joseph and David's help, Michael, Aaron and I made it to the finish line, and even crossed it at a run. 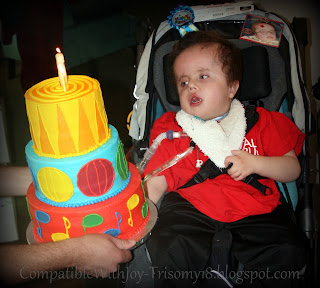 That night at home, family and some special friends came by to wish Aaron a Happy Birthday.  Icing Smiles arranged a beautiful cake for him.  When the baker asked me about it,  I wasn't sure what to tell her.  I mean, what does Aaron like?  Really, is there anything he doesn't like?  But he's the sunshine of our lives, he loves music and playing with the balls that hang over his bed.

Could she possibly have come up with anything more perfect?  I don't think so!  And it was as delicious as it looked! 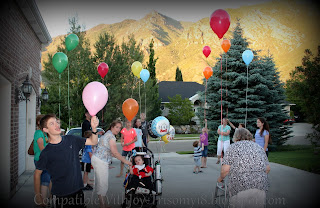 Deborah brought home a bunch of balloons for Aaron, and just before cousins left, we sent them to heaven with kisses for all the angel babies. 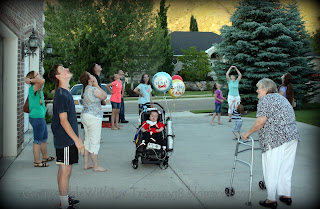 Sometimes it's a bittersweet world we live in, and survivor's guilt is very real.  And some dates just really stick in your mind.  I don't think I'll ever be able to celebrate Aaron's birthday without remember a sweet friend's baby who grew her angel wings the day before he turned one.  Or others who've lit my path and helped me along, or come after him. 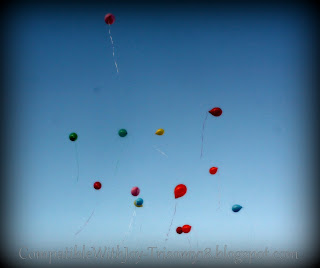 Fly high, happy balloons.  May you find little ones to play with in heaven.  May they know of our love for them, and send sweet angel kisses back to their families on earth.

Happy birthday, little man.  You are my hero.


My hero is an ordinary person who finds strength to persevere and endure in spite of overwhelming obstacles.
Carol Adamski