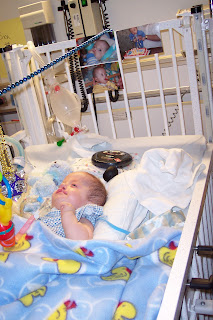 This morning, Aaron's nurse, Jennifer, asked me what my goals were for Aaron today.  We decided that we wanted to move in a positive direction.  That seemed to cover everything.  And he has.  It looks like another trachea infection, psuedomonas tracheitis, and it might have caused some tummy upset.  We won't know for sure for about five days, but based on clinical signs and a high white blood count from his trach, that's what they're assuming.  And as long as he looks good, it doesn't make any sense to keep him here where he can be exposed to other illnesses.
He also may be starting a cold or eye infection.  He's got some discharge and mucus in his right eye and both eyes look a little swollen.  He's slept most of the day, lucky kid.  I actually got a pretty good nap in.  It seems that lately, every time I try to take a nap during the day, the phone rings or he alarms or something about 10 to 15 minutes after I fall asleep.  I slept 1 1/2 hours.  It was wonderful, especially since I was up by 3 am. 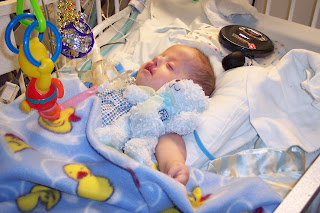 Tonight, we're starting a 2 week round of nebulizer antibiotics called tobi nebs that will be given through his ventilator and increasing feeds slowly. He was on Pedialyte today and then slowly switched over to his formula.  He's supposed to get his regular continuous feeding tonight and then we'll try to go back to bolus tomorrow.
IF that goes well, we'll probably discharge after his 2nd feeding. Hoping, hoping...
Posted by CompatibleWithJoy at 8:43 PM