I Gots Me Some Wheels!! 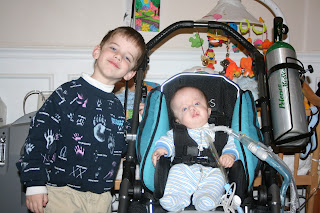 Aaron and I went to Salt Lake yesterday to pick up his wheelchair/stroller. I know that sounds kind of weird.  No nine month baby can get around without wheels, but Aaron also has a TON of equipment that he lugs around, too.  And my stroller is not happy about carrying it all.  So now we have a $5000 (yes, that's thousand) stroller that is supposed to carry it all.  I've bought cars for less.  But it will last him for at least five years, and if his growth is on track, probably a lot longer.  And insurance covered it all.  Thank goodness! 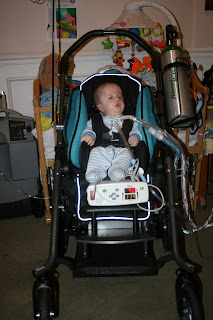 Aaron also had his nine month check-up today and it was wonderful.  Dr. Knorr kept saying over and over how good he looked.  He said he'd never seen Aaron looking better.  He responded by smiling big smiles and drooling big drools.  He's now 12 pounds, 1 ounce and 24 1/2 inches long.  We've had to put away the rest of his newborn clothes.  That's right, at nine months, he's officially out of the newborn size and into 3 months. 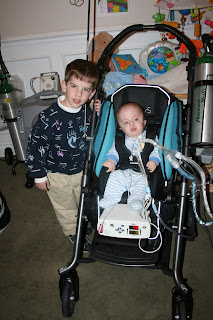 He also got two shots and wasn't happy at all!!  I have to admit, I was sad that he hurt, but grateful he was screaming (silently, of course, because he can't make noise around his trach).   A baby's nerves don't all have myelin around them when they're born.  This fatty sheath protects nerve endings and is needed for effective pain transmission.  Because he is now really upset and hurt when he gets his shots, it looks like this has developed.  It used to be that it didn't bother him at all.  Sorry, kiddo, shots are a part of life. Anyway, he's sleeping them off now.   Hopefully he doesn't have too much trouble with them.  In the past they've made him really cranky and sometimes congested. 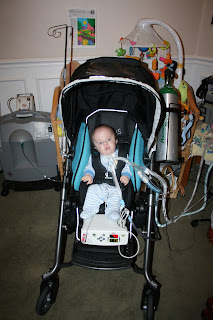 We took our new stroller to the doctors and are still trying to figure out the best configuration for all his equipment.  It sure handles much easier than his old stroller did.  Now if it will just stop snowing we could go out for walks!!
Posted by CompatibleWithJoy at 1:52 PM