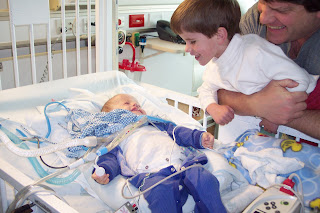 We're home again.  Labs and past history point to a nasty trach infection, tracheitis psuedomonas.  He's probably got it in his eyes as well.  We won't know for certain until the bacteria grows out, but that will take until Friday.  He's doing really well and stable again, so it made sense for us to come home before he managed to catch something else at the hospital.   Because using the nebulizer antibiotic required changing the vent to a completely different mode of operation, they won't let us do it at home.  So instead, he's back on an oral antibiotic which should also take care of his eye infection. 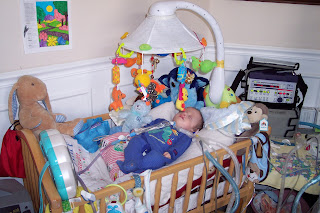 I think he's glad to be home.  As I took down his pictures and toys from his hospital bed, he started smiling.  Then when I got him dressed in his own clothes, he just couldn't stop grinning.  It was like he was saying, "Yea!  I'm outa here.  And I didn't even get an IV this time.  Hurry, let's go before they realize I skipped it!"  He was really excited when Michael and William got there to pick us up.  Now, he's sound asleep.  Happy baby.
Posted by CompatibleWithJoy at 5:00 PM