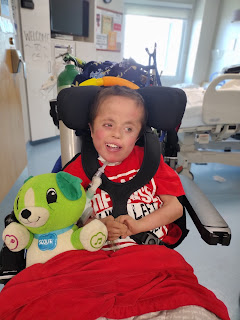 So Saturday we spent most of the day trying to work this kid down from 8-10 liters.  I mean, seriously!    Was it pain?  I mean, he did just get his leg sliced open.  Nope, didn't seem to be.  Was it his gut?  Maybe??  Something else?
Bingo!
Evening breathing treatments the RT asked if we ever used cough assist.  For those who don't know, it blows your lungs up big and then sucks all the air out.  You know, like coughing.
We have used it and even have one at home but he hates it (go figure) and it doesn't usually make much difference.  No one really thought it would because he lungs sounded amazing, but hey, why not try?
Um, yeah.  That was it.  She pulled out three pretty big, nasty, sticky and old plugs out and voila!  His sats shot up, we turned that O2 down and life was great!
He stayed on three to four liters all night so Sunday we were outta there.
It did take several hours to get going, but that was mostly because of a friend I ran into.  I went to church and she and her family were there.  They actually serve up there so I expected to see them.  We got to talking after, and talking, and talking.  And frankly, if I didn't actually need to get us home, we might still be talking.
Someone pointed out to me recently that this life can be isolating and lonely.  She wasn't wrong.  Being a parent of a medically fragile child changes you in fundamental ways.  It's harder to connect, but that connection is so needed, maybe even more than before.
The flip side is that while that connection is crucial, medically fragile means you are terribly busy just keeping that kiddo alive and you don't get out much, thus making relationships that much harder to nurture.
I'm so grateful for the time we had on Sunday.  It fed my soul.  Thank God for friends.
"If I had to sum up Friendship in one word, it would be Comfort."
~Terri Guillemets
Posted by CompatibleWithJoy at 6:26 AM