So Much For Doing Better 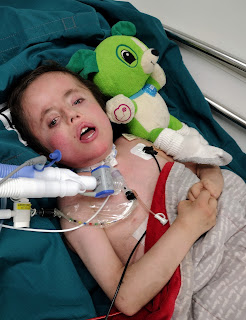 Aaron decided that breathing (okay, oxygenating) was for the birds tonight.  Really don't know what's going on yet, but he'd had a couple desats over the last couple days, and some other really good times.  He'd bounce back pretty quick from the desats so I didn't give them much thought.

Then after school, his nurse suctioned out a pretty big reddish brown plug.

About 6-ish he started dropping.

And his heart rate was going up.

And I wasn't happy.

We started turned up the oxygen.

We started bagging him.  And gave more albuterol.

And he was still not coming up.

I was even more not happy. 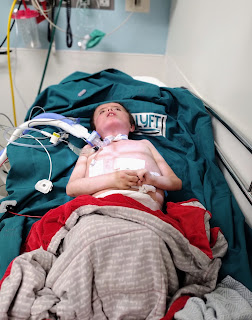 But you know, in the way that special needs families do it, I also ate dinner, put things together, printed out a meds sheet and history paper (and left them on the printer).

What's going on?  We don't know yet.  They didn't even try the regular vent.  Once the RT got him bagged up, she put him straight on the ICU vent and at some point that's where we'll go.

So that's the story for now.  They're getting x-rays and labs, and he's settling down.

Just pray for us, please.

It is not a case we are treating; it is a living, palpitating, alas, too often suffering fellow creature.
~John Brown
Posted by CompatibleWithJoy at 9:42 PM