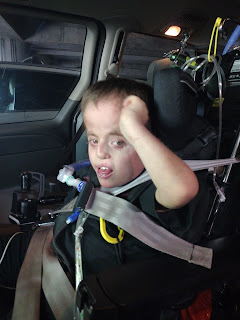 Obviously my writing skills are suffering.  Or something.

Anyway, since school starts for the boys on Wednesday and my kick-off is Friday, I'm calling it a summer.  It's not the one I expected when it started, but in many ways, it's been much better.

When we last left our hero, he was sitting in the PICU getting a new ventilator.

We were there two days, largely because he was doing so well, too well!  He needed to have his settings reduced, and while we only turned them down a little (trying to be cautious) it was amazing!  We haven't seen numbers or activity like this in probably ten years!

He is sleeping better, playing better, satting better on less oxygen than I can even remember.  He's back to "talking" and being goofy.  Part of it is he's STILL coming back from that awful time back in February.  For example, prior to that, he always wore either a long onesie or had pants on.  If not, he also wasn't going to keep his diaper on.  The morning we left for the hospital, he took it off for the first time since being so sick.  So there's that.

But seriously guys, this new vent!! I can't tell you how glad I am that I pushed for this.  Here he is, 24 hours into the new vent, rockin' out with music therapy.  Seriously, new kid!!

He also saw neurology on Friday.  This was a visit I was anxious for when it was scheduled.  They initially told us he couldn't get in until December, or maybe January.  I don't remember.  At the time, he was in a rough enough space that I quipped back that I hoped he was still alive then.  I wasn't being facetious.  It's been that hard around here.  We managed to adjust his medication over the phone and that, plus the vent change meant that our actual visit was a very different tone.  All is looking really good, and I really don't have words to express how grateful I am.

My surgery went well, and after two weeks, I am doing much better.  That first week was really rough and I'm still working on getting my stamina back, not to mention I can't pick up Aaron or even my granddaughter yet.  But that will come.

Got another kiddo who is having surgery on Wednesday because, why not?  But that's his story, not mine, so I'll wait for him to tell it. 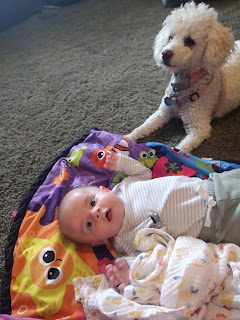 In the meantime, we have our son, daughter-in-law and new grandbaby visiting.  He is sooooo cute!!  The dogs weren't quite sure what to make of the new "puppy" but have since decided he's just part of the scenery, mostly.  They do wonder why the humans aren't doing more when he fusses.  It's like, "you guys, this is your job, not ours!  Fix it!" 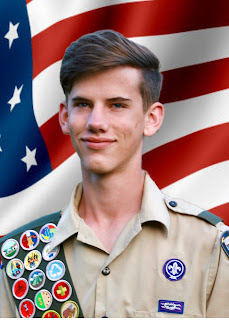 Michael also had his Eagle Court of Honor.  My parents were able to come up for it and for little Elend's christening.  Our house has really been hopping.  Visitors plus something about a new baby brings all the kids around more often.  It's going to be really strange when everything gets quiet again in
about ten days.  But I'm also ready to get back to a routine. 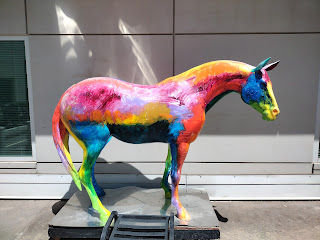 Posted by CompatibleWithJoy at 12:40 PM