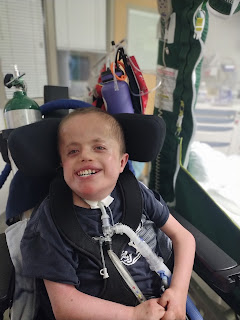 It's been a busy month around here.  But then, I'm not sure when it hasn't been.

Since Easter, Aaron has continued his ups and downs.  We were admitted again the first week of May for a few days.  (May 3-6)

He was struggling, again, and clamped down hard to where we weren't even able to bag him.  THAT hasn't happened since he was tiny.  That time was shortly after his trach surgery and led to three attendings at his bedside at 2 am, pushing three different sedatives through his IV.

This time it was me and his awesome school nurse.  And we gave him Ativan in hopes of relaxing him enough to get him to let us help him breathe.

In fact, it worked well enough that by the time we got to the hospital parking lot, I considered whether or not we really even wanted to go in.  We did.  They admitted him and decided it was a pulmonary hypertensive crisis combined with an asthma attack. 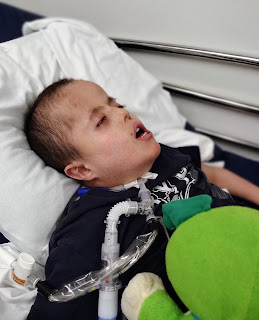 Can I just say that either alone is a challenge for gas exchange?  Together??  Well, no bueno.  So the asthma narrows the airways and makes it hard for the air to get in and out.  Pulmonary hypertension tightens the blood vessels that are supposed to be carrying that oxygen and carbon dioxide.  So let's not just have one problem with our lungs, let's have TWO!

And then while there, we discovered that the eye infection he's been battling since he was so bad in February had morphed into corneal ulcers with infection.  Fortunately, with new antibiotic drops and hourly round the clock moisturizing drops for a few days, it seems to have almost completely cleared up now.

In the middle of all of this, I was finishing finals and Mary graduated from the U with her MBA.  Fortunately, I only had one left and managed to take that while also in the PICU.  Mary's convocation and commencement were right down the road from the hospital.  They were wonderful!  I do love all the pomp and ceremony.  One more year and I'll be doing the same (just further south).

You know I said it was busy. 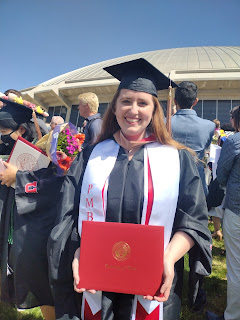 We've now seen ophthalmology (May 9) and comp care (May 11) and are scheduled in with cardiology on May 23.  We're playing with medications again and changing up his food.  He's eating a blended diet again while we try to work everything out.  He does do so much better on real food so we're also seeing a dietician the end of the month.  Good thing I'm on summer break from school, right??

Right now, he's continuing to struggle.  He's fevering again off and on.  Sometimes it responds to Tylenol/Motrin suggesting an illness, sometimes to rescue meds suggesting storming.  He's happy.  That's huge.  But I feel like we're always on edge right now. 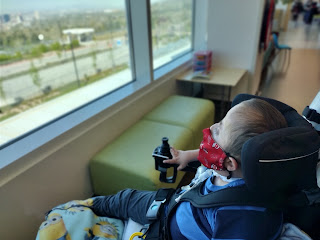 This is hard.  I don't know where it's going, at least short-term.  I know where the long-term is going and I refuse to think about that, at least as much as I can.

So that's where we are, where he is, where I am.

I'm glad summer is coming, I've missed the sun and the warmth.  I am looking forward to a slower pace for a couple months.  I'm grateful, more than I can say, for his smiles!  In a lot of ways, this is easier than when his vitals were looking good but he wouldn't/couldn't smile.  I figure, as long as he's smiling and playing and being goofy, we'll get through it.

But I would really love it if he could stabilize for a while.  It would make my mama heart happy.  I think we both need a rest.

“Take a rest. A field that has rested yields a beautiful crop.”
– Ovid
Posted by CompatibleWithJoy at 9:05 AM