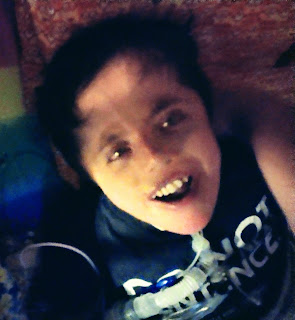 Pardon the lighting, but this was late last night and I didn't want to use flash or turn on the light and disturb the show!

I honestly don't remember our last true smile.  How awful is that?

I know we haven't seen them since he went to the hospital on January 30th. 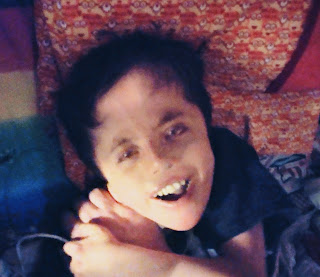 My mama heart has struggled the last eight weeks.  That's how long it's been since he acted like himself.  Truly, it probably started around Christmas.  That was almost three months ago, but he was still smiling and playing until eight weeks ago.  Then there were moments, sometimes a day or two, where things would be "normal" (whatever that is).

He's still tired.  He still is not goofy and silly.  But we have smiles.

¨A smile is a curve that sets everything straight.¨
- Phyllis Diller
Posted by CompatibleWithJoy at 7:12 AM