Where I Am, Where We Are With Everything (Coronavirus) 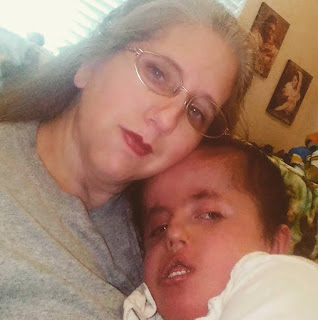 It's been a _____ couple of weeks around here.  Crazy, mind boggling, interesting, confusing, scary, busy, whatever.  You fill in the blank.  I'm not sure where this is going.  Another "straighten out the brain tangles" post.  And it's long, really long.  You've been warned.

Aaron has done pretty well since coming home.  We've seen a few seizures here and there, but overall, not too bad. The new heart med is helping him not work so hard from that standpoint, and also can cause diarrhea, which is not good, except that's the opposite of what he's struggled with the last several months.  Upshot of that is he is not currently on any of the GI meds (2 doses of 2 different meds per day) that he was on.  Take away giving four med doses per day?  Yes, please.

But then there's this whole, well, you know.  It's all anyone is talking about today, and yesterday, and last week, and...

I'm struggling.  Honestly.  But it's also been interesting how things have developed here at home and out in our community.  Two weeks ago it was making enough noise that I was really starting to notice.  Yes, I know it was beyond awful for many before that, but I was dealing with seizures, and it wasn't here.  My brain literally can only deal with so much at one time, and I was already overwhelmed.

The week we came home from the hospital, my husband asked me on Thursday (March 5) what I thought of grounding Aaron, especially from church.  I honestly wasn't sure.  He really likes going, but the facts are, there are a lot of people who don't think much of going to church sick.  It's wrong, it's totally irresponsible, but it's true.  His school, on the other hand, is beyond hypervigilant about germs. It's probably the safest place he could be.  But like I said, I wasn't sure it was a good idea.

Friday morning the news began making noises about Covid 19 already being here, just undiagnosed. I started a conversation with one of Aaron's doctors, and she strongly recommended he be grounded.  So William and I put into place a way to make that happen.  That afternoon, the governor announced a state of emergency for Utah.  That evening, the first diagnosis appeared.

Can I tell you about Sunday?  I heard every single cough and sneeze and sniffle in the congregation, and cringed each time and Aaron wasn't even there.  Yes, I know some may have been allergies, or a tickle in the throat.  But reality is, I haven't heard them since his first year of life.  Yes, they've been there.  I haven't noticed.  But I did this time. My body, my brain, has shifted back into that mindset.  That exhausting, hyperaware, PTSD mindset of constant vigilance.

So that was the first step.

Then this week.  This is my week. It's a huge ballroom competition, National Dancesport, at BYU.  For the past 11 years, I've pretty much spent Wednesday through Saturday of this week at the Marriott Center.  We had a lot of discussion about whether or not I should go.  But I was also taking care of my cute granddaughter there.  We talked about social distancing.  I planned to only be there for the days mine were dancing, Wednesday evening, all day Thursday, and Friday morning.

On my way there Wednesday, William called me.  Church leaders had called off Stake conferences, determined that missionaries would be trained at home, and that General Conference would not have people in the congregation.  He wanted to talk about locking down our house, and having all of us stay home from church so as not to bring anything home to Aaron.  I was totally on board with the first.  It's not like we have that many people come over anyway, but to restrict it to just nurses working and our family seemed more than reasonable.  I was really hesitant about church though.  He reached out to our bishop (leader of our local congregation) about this as well.

I went home and told William I was totally on board.  The next day the governor held another press conference, asking people not to gather in groups of more than 100 starting next Monday.  He stated that this did not affect public schools, but pretty much everything else.  That afternoon, church officials suspended group meetings immediately.  Once again, my husband was ahead of the curve, and I had been dragging my feet.  But still, Dancesport continued.  So I was there.

Guys, this is a big deal for a lot of people.  It's where they declare a national champion and send them to the International Championship.  Yeah, I know, so is the NCAA tournament, so is the NBA, and all the other things that were also being cancelled.  But for me, for my kids, this was personal, this was where the rubber met the road. 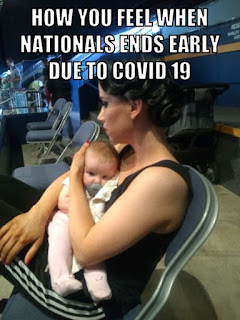 BYU even suspended classes.  And still the dance went on.  Until it didn't.  Mid-afternoon, the director of the ballroom program came to the podium and announced that at the close of the evening, it would be over.  Gasps and tears were audible through the arena.  Deborah would finish her competitions, but Jonny and Avanlee would not.  One that they stood the best chance in was on Friday morning.  It was the last time they would dance in a competition before leaving for Saudi Arabia next fall.  Teams and couples from around the country who had prepped all year, would not take the floor.  It was hard, and heartbreaking.

And our schools?  Well, Friday was a half day because of end of term.  Just was, and was on the calendar that way a year ago.  They announced that Monday and Tuesday would also be half days so the teachers could learn and prepare "in case" schools were closed.  Yeah.  In case.  Friday afternoon, the governor closed schools for two weeks.

This one scares me.  It scares me not just for Aaron, but for those around us.  Over the past several weeks, I've had lots of students wondering what the big deal is.  I mean, it acts like something between a bad cold and the flu.  And for most of us, that's what it is.  But not for everyone, even every typical person.

So we'd do some math.  Say you've got 2400 students in the high school and a quarter of them have it at the same time. That's about 600 sick students. (Not that they got it at the same time, but are currently sick at the same time.)  Current numbers say that kids do much better than adults, but still, 1-2% will need hospitalization to make it through.  So maybe 6-10 need a hospital.  That's not bad.  That's totally doable.  Until you realize that this is one high school.  Our district has 12.

There are 78,000 students served by our district alone.  With those numbers, if a quarter get sick, that's 19,500 sick kids, and I don't think that's too out there.  We're confined in one county, mostly the northern part and interact through sports and other activities on a regular (but not now) basis.  If 1% need care, that's 195 kids.  From one district.  In a state with 41 districts.  Where the local children's hospital serves a five-state area, and has 266 beds, including long-term patients like NICU and cancer and organ transplant children.

And kids do better than adults.

Frankly, I've had to unfollow a lot of people lately.  Usually when things are  posted that I find irritating, or even ridiculous, I roll my eyes if I do anything and scroll on.  But because my anxiety has been high, for my own mental health, I find I can't handle the misinformation or the casual dismissal of what will happen if things aren't better controlled, if we can't flatten that curve.

Aaron wouldn't even be admitted, for anything, if things got out of control.  If our healthcare gets overwhelmed, the fragile ones have to be dismissed so that others can be saved.  The elderly, the ones with underlying conditions, the ones less likely to live.  If things get big, even typically healthy people will die that would otherwise be able to get care and live.  It is beyond critical that we slow the growth, flatten the curve.  I can't stand the thought of this turning into what's happening in Italy. 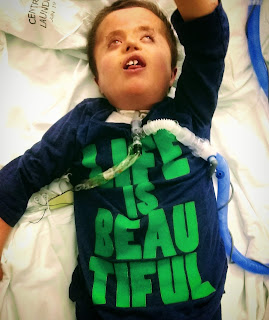 So that's where my brain is now.  For my own well being, I'm cutting back on how often I check in on the news.  We're putting together plans for church at home and trying to figure out school here as well.  Aaron's school nurse will still be coming, at least for a little while, because she knows much more than I do about what and how he's learning.

Just over 30 years ago, Hurricane Gloria hit the eastern seaboard.  I was a junior in high school, same age as one of my boys.  The governor cancelled school across the state and yes, it was pretty rough for a lot.  I remember waves crashing through casino windows down in Atlantic City.  There were a few deaths, but nothing like the state had prepared for.  It turned back out to sea instead of hitting us full force.  For my family, it was really bad wind and rain, and I remember being irritated by my mom who wouldn't let me go hang out with friends.

I very much hope and pray that this will be a "Hurricane Gloria" for us, where it disrupts life and causes inconvenience, but we all get to come back together.  Can't even begin to tell you how much I pray for this.


Hope is some extraordinary spiritual grace that
God gives us to control our fears,
not to oust them.
~Vincent McNabb
Posted by CompatibleWithJoy at 12:59 PM