Our Week in a Nutshell (Mostly) Our life is crazy.  So is yours, I’m sure.  It’s just different kinds of crazy, but sometimes, it goes a bit (a lot?) over the top!

I think it started on Tuesday, although possibly Sunday.  But Tuesday was the defining moment.  Andrew had an ensamble performance for a solo/ensamble assignment and Aaron and I were going over to listen.  Except the Aaron we put in the wheelchair morphed into something else: a stiff, non-responsive, somewhat discolored, appearing to not be breathing creature.  What??  I checked trach placement, we made sure oxygen was actually on, and then it was over.  He had seized.  Hadn’t seen one of those for a long time, but apparently, they were back.

Over at the school, he had a few more, and then went for the whole “breathing is optional” scenario, so I bagged him.  Hey, unfortuantely, that’s part of our routine craziness. We just do it.  And then because he’d had about five or six seizures, when we got home, I gave him his rescue med.

Tuesday night was a bit restless in sleeping, but he slept.  Wednesday morning, his regular seizure med got overlooked.  He had a seizure during PT at school, and then that afternoon things really ramped up.  Five in about an hour, gave rescue med, they continued.  Five more and another dose of rescue med, and still they kept going. By then we’d gotten him home and realized that his Keppra had been missed, gave it, consulted with neurology, and came up with a game plan.  There were a few more, and then he fell asleep, HARD!

Slept soundly from about 5:00 pm until about 10:30 pm, restless until about 5 am, and then slept pretty much ALL DAY Thursday, waking for about an hour, (another seizure!) and then asleep until Friday mid-morning. 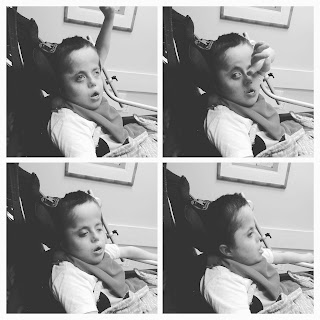 And then?  You guessed it, more seizures.  After another cluster, we gave his rescue med yet again (four times in just under four days).  At that point, I was done.  We had to do something, so we came up to Primary’s.

Here’s the thing: illness causes seizures, but he’s not sick.  Stress can cause them, but he’s not stressed that we can see.  We had seriously No Idea!  We decided to stay and watch him for a couple days.  And neurology said to increase his regular seizure med.

Saturday went okay.  There were a couple times that we thought he might have had one.  But Aaron’s seizures are really pretty short.  If you’re not watching, you miss them.  Twice he had been playing and then just zonked out, super fast.  We think he may have had one and then we caught the postictal phase.  Who knows?

But, in addtion, his oxygen needs were going up, and up, and while it’s not been that unusual for us to deal with this, the doctor wasn’t real impressed.  She put in a call to cardiology.  They ordered labs.  The x-ray shows his heart is a bit larger for size than his last views.  And yeah, his heart is working harder again.  Sigh... 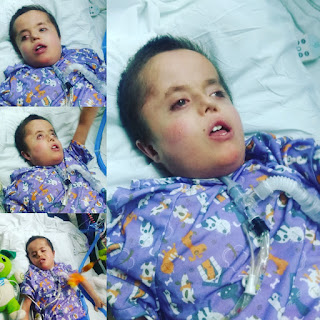 They’re putting him on a heart med we used back when he was tiny and in heart failure.  It will help relax things a bit and let his heart work more effectively.  Except, it can also mess a bit with some electrolytes, so we had to check them first.

Another lab draw, another poke.  And some different news. His electrolytes have always been really good.  And they weren’t really bad this time either.  But some were low.  Shouldn’t have been low enough to cause seizures, but maybe???

So they gave him potassium and magnesium, and maybe calcium.  (I can’t remember right now.). And then the heart med.  And ya know what?  He’s looking pretty darn good right now!

My night owl, my “don’t you dare wake me before noon” kid has been up and playing pretty much all morning.  We don’t see any seizures.  He’s still on a (fairly) managable amount of oxygen.  And we’re hoping to get our walking orders soon.

And that, in a very large nutshell, is how things are going right now. 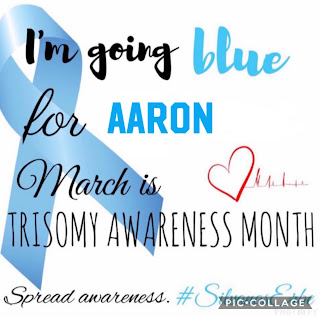 Today is March 1st, the first day of Trisomy Awareness Month.  My goal is to post a picture of him  each day to instagram and Facebook.  Today I’m hoping it’s one of us going home.

Posted by CompatibleWithJoy at 2:19 PM