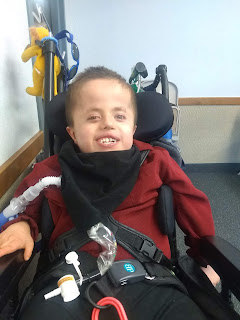 When you have a kid, baby, tween, teen, whatever, you're responsible to parent them.  You make sure they have food, clothes (waaaay too many clothes), shelter, things to do (tooooo many things!) and so on.  You teach them manners, they teach you insanity, you know.  It's life, right?  And no one with kids ever said it was easy.

But some people get into extreme parenting.  It's not enough to make sure they have food, you have to know the nutrition and calories, they have to have special food due to allergies, or lack of figuring out that whole "suck, swallow, breathe" thing.  You learn to place feeding tubes, and come up with ways to keep them from pulling that silly thing out.  You learn about oxygen saturation rates, and ventilation, and heart rates.  You learn seizures, and pray they don't show up.

You check to see not only that they're breathing, but make sure the oxygen levels are good, heart rate are good, the machines are working, meds are given, (meds are actually in the home! we have to use three different pharmacies) and so on.  You can't leave your child with the kiddo down the road, you have to hire a professional to take care of them.  And you end up on a first name basis with your paramedics and children's ICU team.

You figure out how to tell if the blood gasses are good or not, without the tests the hospitals do.  (Did not even know that blood gasses existed before!)

Yeah, extreme parenting.  It's a "thing."  Not one for the faint of heart.

It's been an "interesting" four weeks.  And I'm sorry, no, I haven't written.  It's not for lack of things to say, more of a too much to say and not able to figure out how to verbalize it.  This may be long.  I may ramble.  You've been warned, but I've had a few family members ask if they've been dropped off notifications because they haven't seen anything.  Nope, there hasn't been anything to see, mostly 'cause you can't see inside my brain.  Not that you want to anyway. 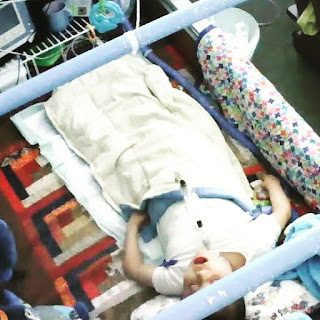 When last we left our brave hero, he'd come home from an evening in the ER because of blood in his trach.  That resolved fairly easily and we moved on.  But on Sunday, May 5, he got a tummy bug.  Poor kiddo was really miserable!  It took a couple days to get over, but he's got the calories to spare, so it wasn't too bad from a medical standpoint.  At least for the next few days.

By Friday, he ran a fever and started pulling at his ears.  Yeah, all that retching and vomiting caused fluid in his ears and an infection.  I felt so bad.  If you haven't had one, or don't remember, imagine a hot needle poking right through your eardrum.  Ouch!!

We did the antibiotics and got our new trachs.  But I was told we needed to come into clinic to change to the bigger one. The next appointment was a month away.  Meanwhile, he was getting tired, almost in a life-weary way.  His oxygen needs had stayed way high, not really coming down even though he acted like his ears weren't bothering him anymore.  We had tried to start vent weaning before he got sick, and it went "okay" but not great, and then stopped all together when he got sick.

Not only were we not able to start the wean again, we couldn't even maintain him on his regular vent settings.  We had to increase to his secondary or "sick" settings, and still, he struggled.  He spent most of his time maxed out on his oxygen and we were forced to accept lower sats that we really wanted, like down to 80-82%.  Frankly, one of the reasons I haven't written is that sometimes it's just HARD!

The way things were going I figured there were two options:   try putting his new trach in and see if that helped, or take him in.  We couldn't maintain at home this way any longer.  I called for permission, left a message, and after 48 hours, just put the new trach in.

It hasn't been all roses since, but So. Much. Better!  Within an hour, we were able to reduce his ventilator back to primary settings.  He was still high on oxygen, but it was doable again.  The next day was rougher as he was sitting for the first time.  See, the new trach is slightly wider and slightly longer.  So his trachea has been used to the smaller one, and now there was more irritation and more coughing, which equals more secretions etc.  (The reason you've got mucus when you're sick is because your throat is irritated by the virus.)  So more secretions means slightly lower sats, but still!  Primary settings!!

The past ten days or so have been ones of improvement.  He's awake more with more energy.  He's stayed on primary settings even with the higher pollen counts and increased need for albuterol (which we were using before but not getting any help from).  His oxygen needs are still higher than I'd like, but we accept lower sats much less.  And his voice is even coming back.  We lost it when we put the bigger trach in as it's harder for him to push air past the new trach up to his vocal cords.

The long and short is the new trach is helping, a lot.  But the team is also probably right.  His pulmonary hypertension is probably continuing to worsen.  But the new trach seems to help him ventilate more, removing more of the CO2 he's trying to get rid of.  And next week, we'll start trying to wean again, starting at 30 minutes twice a day.  If that works, we'll move on from there.  If he stalls out again, they'll do a lung CT some time this summer to see if there's more we can learn about what's happening.

He even made it out all day on Saturday to visit family graves and deliver flowers. 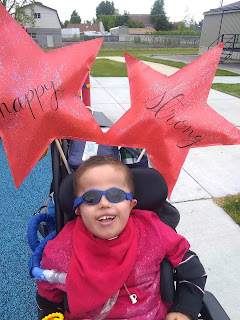 So there you have it.

But it's so worth it.


Posted by CompatibleWithJoy at 10:36 PM