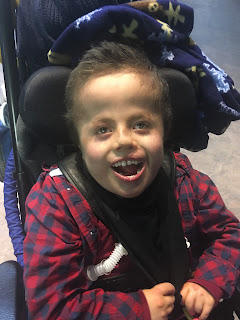 So, the last post about our spring break and all...

What, you don't remember reading it?  I guess that's because I never managed to finish it.  Here's what it said in a nutshell:

Spring break was at home (glorious!) for only the third time in his life.  We saw the dentist and eye doctor and both were very pleased.  He saw sharks and butterflies and all sorts of other creatures at the Mascot Miracle Night at the Aquarium, and was enthralled.  Fun night to see other families on our crazy, special needs journey. 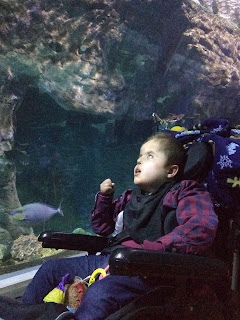 The next week he went for his all-you-can-eat appointment with several specialists.  Long and short of that is we're going to try to very sloooooowly start weaning from the vent again.  "Very slow" as in it will take us two months to get to four hours a day.  Prior to his pneumonia admit, he often did up to eight hours.  That's okay.  It may have been too much so this way we'll find out just what he can tolerate.  He's also getting a new trach (as soon as it comes in).  I'm hoping that his current oxygenation and ventilations issues are due to the small pixie stick he breathes through.  His team isn't so sure.  They think it's "disease progression."  We all hope I'm right, but I guess we'll see.

And that mostly brings us up to this week.  Yeah, adventures....

He and I differ on which is worse (harder to process, deal with, whatever).

Over the past ten days or so, we've started pulling blood out of his trach.  At first, it was just a little pink stuff.  Then some more.  Occasionally redder. He started coughing up some. Then it was a clot, then two.   Tuesday night, he coughed up a bunch of stuff that got stuck in the ballard.  When I went to clean it out, it was a clob of blood and mucus and maybe some tissue.  (TMI?  sorry)  On Wednesday, I pulled five (5!) clots out, and they were pretty good sized for where they were coming from.  And then he coughed up some frothy pinkish red secretions.  By Thursday, I was done.

See, it was likely not a "big" issue.  But we'd done a trach change the week before with no bleeding and no signs of granuloma (where the body tries to heal itself by creating scar tissue which can bleed quite a bit).  We haven't changed medications, he hasn't been sick and showed no other signs of illness.  Slightly higher on his oxygen but not much.  So there was nothing we could point to that would cause this.  Except there was the slight possibility that it could be something really bad, really, really bad. 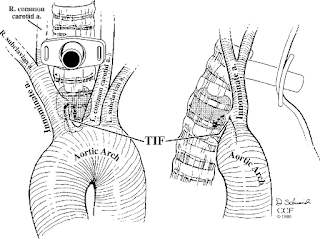 There's an artery that runs just behind where the trach sits, and sometimes, very rarely, the trach rubs enough on the trachea to wear through to it.  Remember first aid?  Remember what happens when an artery is cut?  Yeah, Not. Good. At. All.  And you can't just put pressure with your hand on this one.  It's behind the trachea.  Which leads to the lungs.  Where you breathe.  Without gills that a fish has.  Where liquid isn't your friend.

So after researching exactly what emergency procedures would be, and the likelihood of them working....  Well, let's just say it's more than I wanted to deal with in so many ways.  (There are some, and I was prepared to instruct paramedics exactly how to handle them.  Wanna talk about stress?  Trust me, you're better off not knowing.)  So we went up to the ER on Thursday night. 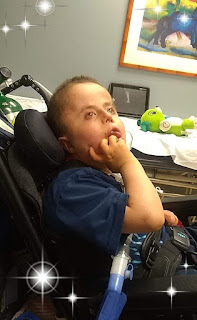 ENT scoped him out and yeah, there's a raw, pretty much open sore in his trachea.  But it's below the trach site, so probably from too deep and too vigorous suctioning.  Who?  Who knows.  Good chance I've been helping with that.  But they prescribed some drops for it, antibiotic and anti-inflammatory drops to help, and we're pulling way back on his suction depth.  It wasn't much before, and pulling back means possibly not getting "stuff" that should come out.  But he's got a decent cough so we'll help him out that way.  She also took a look at the area where his trach actually sits.  (We had to pull the trach out for that.) The good news is that it looks really good there.  So Mama's breathing much, much better herself.

Now for Aaron's traumatic issue.  Mama did that one, but didn't really mean to cause a problem.  Michael had a piano recital yesterday and we stopped to get a treat on the way home.  I had an awesome tropical shake and felt sure that if he would just taste it, he'd decide that maybe it was okay to sometimes have things in his mouth.  He was pretty sure he didn't want any.  Used one hand and then the other to push it away, clamped his lips tight and turned his head.  Except, Mama knows best, right? 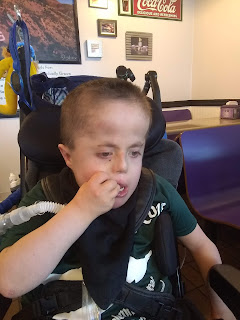 So when he was just kinda hanging out, looking the other way but with his mouth open a little, I stuck a small bit in.  It was only a tiny amount, maybe a half a teaspoonful.  But you should have seen the look he gave me!  He did move it around and swallow it, but he was Not. Pleased.  It was a look of astonishment and betrayal and "how could you?!?"  And I don't think he took his eyes off me again for a long time.  I did try to gently offer some more, just in case he realized it was good stuff.  NO THANK YOU!! 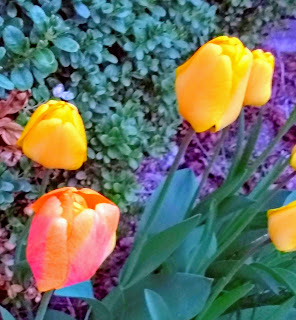 So I guess it's a good thing he's got his g-tube and blended diet.  But he really didn't know what he was missing.  I think he might be okay with that.

On another note, my tulips are blooming, the sun is out, spring is here.  Life is good.


When flowers bloom, so does hope.
Lady Bird Johnson
Posted by CompatibleWithJoy at 2:30 PM