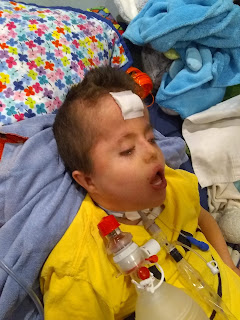 Not even quite sure where to begin this.  It’s all still processing, percolating, or maybe even just trying to avoid reality.  But here goes:

Aaron was a little “off” Saturday afternoon and Sunday.  Almost seemed more like tummy issues than anything.  In fact, by Sunday afternoon, he was doing better.  Totally fit into a “24 hour bug” kind of thing.  Okay, whatever.  He’s a kid, right?

Then Sunday during the night, he started struggling with his sats, and his heart rate went up, too.  He had a low-grade, barely even there, fever.  Asthma?  Probably.  The air quality is pretty nasty, although better in Alpine than down lower in the valley.  But he stayed home from school on Monday, and I figured maybe Tuesday, too.

Monday night was worse, but still, not crazy.  The nurse called me at 1 am because he was struggling so much, but we bagged him while also giving Albuterol and again, low grade fever.  Most important, even though his vitals weren’t awesome, his demeaner was.  I mean, this kid was a nut!  It’s 1 am, the nurse and I are bagging, suctioning, giving albuterol, and he’s laughing at us, grabbing cords, and being oh so “helpful!”

Here’s the sad, ugly truth about family medical life:  We schedule our emergencies.  How twisted is that?  But we do.  Obviously, when it’s truly life-threatening, we drop everything and run, but we also learn how to manipulate the system (our kids?) and cram other things in, too.  I had a work assignment, and they kinda frown on subs cancelling at the last minute, although they also would have totally understood.  I had an appointment in the afternoon that I needed to keep if at all possible.  But that said, I wasn’t sure either of those were possible.

When I went to the school, I let them know that things were pretty dicey at home.  I appologized to each of my classes about keeping my cell phone on, and told them that I would only answer calls from my nurse or home. I checked in through the day via his camera.  He was sick, we moved to giving him albuterol every hour, but still, he was (mostly) “okay.”   In fact, his nurse sent me this video of him being “sick.”  He’s being bagged, but seriously, does he look like he’s in trouble to you?

And my students were so sweet.  I even had a couple come back later in the day to check and see if I was still there and ask how he was doing.  But then Holli (his nurse) called as school got out.  He was in the upper 60’s and not coming up well even on 15 liters being bagged.  Michael and I ran (literally) to the car and raced home (five minutes away).  I debated about whether to call her back and get the ambulance on the way.  But when we got there, he was back in the mid 80’s, where he hangs out anyway, and he was moving back to the ventilator.

We watched him for a little bit, and I asked her what her gut was saying about things.  She said he could probably hang on until I got back at 6 or 6:30.

Don’t get me wrong, I knew, knew, he was going to the hospital and going to the PICU.  But you know, that whole “schedule the emergency thing...”

I did leave my bag packed, told her what needed to happen if he just wasn’t going to last, let Andrew and Michael know what kind of help she would need, you know...

Well, he did “okay” until we got back home, and then he was DONE!  He dropped again into the mid-60’s and we had a hard time getting him into 70’s.  I told William that this was going to be a fast “throw and go” when the paramedics got there.  We weren’t going to be messing around.  In fact, with him hanging in the lower 70’s, I worried that they might call for the chopper.  He did manage to get to lower 80’s by the time they were there, but we still moved pretty quickly.

We got him loaded and took off, and he dropped again.  And stayed down.  Cranked the oxygen up, suctioned, started albuterol continuous.  They hit the lights and sirens.  And we worked him.  We came in on 20 liters of oxygen, bagging, 28 puffs of albuterol one minute apart, and blue-purple lips.  Sats in the mid 50’s to lower 60’s.  Fever  of 104.8.  Yeah, almost 105 degrees.  I don’t think I’ve ever seen my little boy quite this sick.

And here’s the thing:  when someone comes in that sick, it’s a crowded room, lots of things going on, lots of people.  And they work together really, really well, which scares me to death.  I know for a lot of people that calm and smooth process is really good.  But when various specialties work like that, it’s because they’ve practiced, because when it’s critical, they have to.  Lives depend on them.

We had two IV teams.  This kid who can take an hour plus to get an IV had two large ones running almost immediately, and one had a high-powered antibiotic going through it.  The RT had him on a vent, off the vent and on an ICU bag, and we changed out his trach within minutes.  The doctor, three nurses, two tech were all in there as well.  X-ray was right outside the door.  It was scary, terrifying, and heartbreaking.

The upshot of it all is that he came back negative for viruses (at least the ones they can test for) and positive for a right-sided pnuemonia, that we’re assuming is bacterial based on the negative viral panel.  They’ve pulled blood to test for bacteria and the antibiotics he’s on will cover those if he’s got sick blood.  Sepsis is a real concern, and it’s not something you ever want to play around with.

All in all, he’s a very sick little boy.  On the positive side of things, he’s still on the ICU Trilogy (the ICU version of the vent we use at home).  We’ve got lots of room to escalate things if we need to.  The down side?  He’s pretty much maxed out on it, he’s still pretty lethargic, and it’s going to get worse once he does wake up.

He’s not “helping” with any of his treatments.  He’s leaving his cords alone.  When he’s awake, all he wants is to go back to sleep.  So he does.  We’ll let him sleep as much as he wants to, and hopefully it is a healing sleep.  It’s almost Christmas.  Our bug needs to get better and come back home. “Prayer is an act of love; words are not needed.
Even if sickness distracts from thoughts, all that is needed is the will to love.”
Saint Teresa of Avila
Posted by CompatibleWithJoy at 11:49 AM