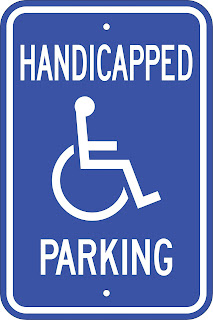 I rarely vent on social media, but this is a social issue.  Not that I'm under any delusions about reaching the people who really need to see this, but still...  I'm frustrated, and angry, and tired, and probably a multitude of other emotions.

Four times, FOUR TIMES! in the past 24 hours I've struggled because someone (okay, four someones) decided that they and theirs were more important than someone needing help.  Twice at a soccer tournament, twice at back-to-school night, the same school.

I get that there are a lot of cars.  I get that it's hard to find a spot.  And those empty spots up front look mighty tempting.  But ya know, there's a reason they're so close to the entrance and it's not because I think I'm better than you.  It's because we really need them.

And those ramps on and off the sidewalk?  Yep, they're pretty important, too.  My son in his wheelchair with all his equipment weighs between 125 and 150 pounds.  Tipping over his chair as we try to negotiate a curb would be disastrous. We need that access.

Let me take you through what it takes to get Aaron out and about.  We do it a lot, it happens, but it's not that easy.

Diaper change, food and meds if we're going to be gone long, oxygen tank.  Do I have enough for the outing?  How long will we be gone and do I have a back-up plan if it lasts longer?  What if he struggles and needs more?  Have to plan for that.  Do I have enough battery on his pulse/ox?  Has his suction machine been charged?  Do I have a new "nose" (filter) and suction catheter for when he gets junky?  And we haven't even moved him yet.

Time to go.  Lift him into his wheelchair.  Turn his oxygen on, unhook him from the vent, hook him up to the tank.  Turn off the vent, humidifier, oxygen concentrators (yes, two).  Unplug the pulse/ox and wind up the cord, place on the wheelchair.  Buckle him in, five buckles.  Now we're ready to leave the room, as long as the switch from vent to "nose" hasn't dislodged anything that will need to be suctioned first.  That happens a lot.

Out to the car, down the ramp, open the car, lower that ramp, up into the van.  Reattach the floor buckle that has to be undone to get him in and out.  Secure the wheelchair at four points, secure his seatbelt.  Make sure it's not twisted and he's all good.  This requires access through both side back doors and the rear door.  Add extra oxygen if we're going to be gone more than a couple hours.  There's always a back-up tank in the car, but it's for emergencies, and yes, we've needed it before.

The good news is that his "go bag," his emergency bag with extras in it, is always on his wheelchair, so I don't have to remember any of that, unless of course I use something and it needs to be replaced.

Finally, we're on our way.  BUT when we get where we're going, it's a reverse of putting him in.  And then once we're out, we have to move kinda slow.  We can't just "slide" through the crowd.  We can't take the stairs.  We don't fit in a lot of spaces. 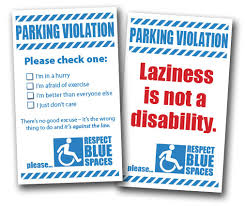 Guys, this is hard!  But it's doable, and I don't mind.  But when someone who is able-bodied thinks that what they are doing doesn't matter, well, it does!  It saps the energy, energy that I really don't have to spare.  It takes away from what I do have to give.  Frankly, it makes me want to cry.  And when I mention that I can't get to my car because you're blocking the ramp off the sidewalk (and there was no way to go around, there was landscaping on both sides) telling me that you were just leaving anyway, like seriously, what was my problem??  Well, YOU are my problem.  And I have already waited, trying to figure out how to get to my car.  Waited in the heat with a little boy who was already struggling.  Waited while trying to see if maybe I could possibly ease down around the driver's side because not only were you taking a handicapped space, you were also parked over the hashmarks that are designed for a wheelchair van to use. 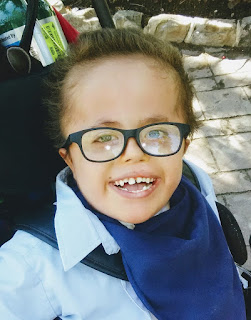 So please, people, think of someone else.  Think of those who are not as able as you are.  Yeah, it's an inconvenience to park way out there.  But so is trying to get around when you're not mobile.  And honestly, sometimes I get to the point where I wonder if it's worth it to try to go out at all.

I know it is.  Aaron needs that.  He doesn't deserve to be homebound just because Mom gets tired of fighting battles.  What he deserves is to be able to enjoy the world, just like any other child.

And by the way, it's $125 fine to park illegally in a handicap spot in Utah.  Maybe it's time to get our local police involved.


“Accessibility allows us to tap into everyone’s potential.”
― Debra Ruh


Posted by CompatibleWithJoy at 8:58 PM