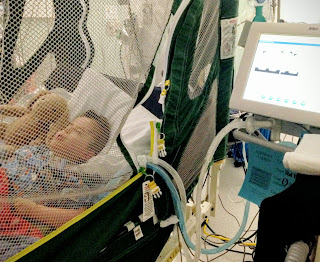 It’s been a tougher go this time around.  Not anywhere close to what a lot of my medical mama friends deal with, but still, for us, it’s hard.

Over his last several admits, we have come in at or close to the peak of his illness and need some, but not much, extra support, get better and get out.  This time, we were admitted pretty close to the beginning, plus there was the whole need-way-more-support-than usual thing.  Like I said last time, we haven’t needed this vent for several years, and he’s still on it.

We tried to reduce his PEEP from 14 to 12 on Monday, but I guess he forgot to read the script, or just decided to go rogue.  Whatever the reason, it didn’t work.  (FYI, most of us would probably sit about 5, and Aaron’s usual is 10.)   When we increased it back, he still needed more oxygen.  He spent most of Monday afternoon and all of yesterday needing between 80 and 100% oxygen.  They also tried to stop his antibiotics because his samples weren’t growing much out.  But by afternoon, we were pulling some really nasty, thick, tan colored secretions out of his trach.  For the record, that’s not a good thing.

So we restart the antibiotic (he only missed one dose) and also added on one more, Vancomycin.  The thing with Vanc is that it can cause something called “Red Man Syndrome.”  Now, he’s had Vanc before, quite a while ago, and not had any problem at all.  Again, not this time.  Poor baby, as the IV meds finished, his face turned tomato red, swelled a little, the rash spread over part of his torso and back, and down into the groin area.  Treatment was Benadryl, which knocked him out.

All in all, it was a really rough day.  Not only did we not make progress, but he continued to get worse. 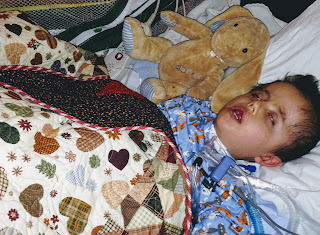 But then, Daddy showed up for a little while in the afternoon, which brought out the biggest smiles we’ve seen so far!  He’s been happy pretty much the whole time, but not nearly as much as when Dad came by!  And after his long (Benadryl-induced) nap, he stayed up most of the night.  You know, his typical routine.  He’s sleeping again now, and we have (finally!) been able to wean down on his oxygen again.  The charge nurse brought by a beautiful quilt for him that someone donated.

So life is not all bad.  There are some incredible people here who take really good care of him.  The PICU is bursting at the seams again, mostly with respiratory “stuff”.    Part of the neuro trauma unit has even been converted to extra PICU beds.  But they all keep working hard, trying to keep these kids safe, get them better again.

And I’m so grateful for them.