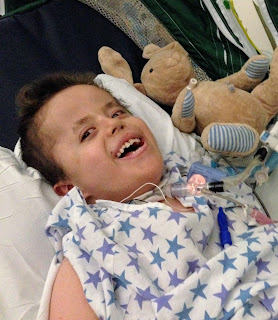 Well, I got half of the diagnosis right, he does have rhino.  I missed the pneumonia.  Oops.

Yeah, pneumonia.  I think I mentioned a long time ago that it’s the longest four-letter-word I know.  No bueno.

There are a variety of ventilators that are used for patients depending on their needs.  At home, we use a Trilogy home vent.  Works great!  There’s an ICU version which lets us give up to 100% oxygen because the home vent is limited to about 60% (and that’s on 12-15 liters of oxygen).  That’s what he was on yesterday when I wrote, and using 80%.  That worked for a little while, but didn’t last.

We ended up on 100% on that vent and he still wasn’t terribly impressed.  By the time we got settled in the PICU, they had to switch him to a more sophisticated and powerful vent called a Drager Evita. There are still more complicated ventilators, but he’s never had to use one.  We used to be on the Drager when we came in, but that was before the hospital had the Trilogies.  We haven’t used one for over four years.  But this kid wants what he wants.

Overnight, we were able to wean his oxygen down from 100% to 55%, but he’s also on much higher support keeping his lungs open.  The immediate goal was to get his oxygen down so that if he got worse, we had some room to move to help him, rather than already being maxed out.  They haven’t rounded yet, but I think (I hope) today’s goal will be to reduce his support settings closer to his home settings, and then we continue to work.


Long and short, he’s pretty sick, and there is no way we were going to be able to take care of this at home.  And I’m so glad I listened to that little voice yesterday morning that said, “it’s time to go.”  With the support he needed by late afternoon, it would have been a challenge to get him up here, even bagging him all the way.  Much nicer to drive ourselves than to have to rush up with lights and sirens, which is where it would have been.


BUT, someone also forgot to tell him that he’s sick, which is huge!  When he didn’t have the support he needed, he was tired, almost lethargic.  But support him?  Yep, smiles and songs and crazy hijinks.  He serenaded the unit last night while also pulling his wires and monitors off.  He took his 15 minute nap about 9:30 last night and then was good for a long, late-night party.  Right now, he’s asleep, but my guess is most kids who stayed up late would like to be as well.

So it’s going to take time and effort, but he’ll get better.  They’ve got some high-powered antibiotics on board, given that the most likely culprit is psuedomonas, a nasty bacteria.  And in the meantime, there is a lot of staff around here who are stopping by to say “hi” to him, and remarking about how wonderful it is that they haven’t seen him for almost six months.


Life:  it’s about the gift not the package it comes in.
Dennis P. Costea, Jr.


Posted by CompatibleWithJoy at 10:52 AM