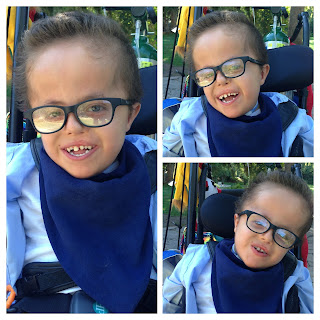 So many people think that because Aaron is so delayed, he's like a baby.  Yeah, not quite.  He's seven, and very much seven.

This week he came up with two new "tricks" that we could have done without. 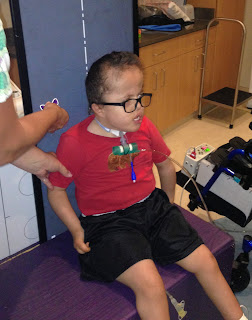 Wednesday, he had his annual scoliosis screening.  Yep, it's progressed some more.  40 degrees now.  Other than yet another thing weighing on this mama's heart, it's not a problem, yet.  If he sat independently, they'd start considering him for surgery at about 55 degrees.  Because he doesn't (yet) they won't worry until he's closer to 80 or 85 degrees curvature.  By that point, it will be crushing his heart, lungs and other organs.  I'm just not going there now, I can't.

But I guess he got bored on the way home.  Shortly before our exit, I hear a metal clunk.  What?  Was that a seatbelt?  I reach behind me and grab it, and guess what!  It's unbuckled.  So I'm wondering, did I just not fasten it well?  How could I do that?  I've got to be more careful.  Weighing my options, pulling over on the freeway and taking our chances that way, or just continuing a few more miles to the exit, I went on. 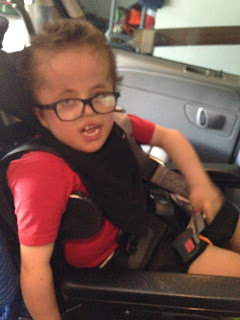 At a park and ride, I opened his door, buckled it firmly, and told him, "no funny business."  He grinned.  I should have known then I was in trouble.  About three more miles down the road, I heard the "clunk" again.  He did it again.  Not cool.  I'm impressed, but not thrilled.

Then today, while I took a nap, Andrew was keeping an eye on him.  He alarmed low sats over and over and over again.  As soon as Andrew walked into the room, he was fine.  So big brother decided to try an experiment.  He walked out of the room, but peeked around the corner.  Sure enough, Aaron reached down, grabbed his pulse/ox cord and started yanking on it until it started alarming.  When Andrew showed up, he dropped it and started playing.  What a kid! 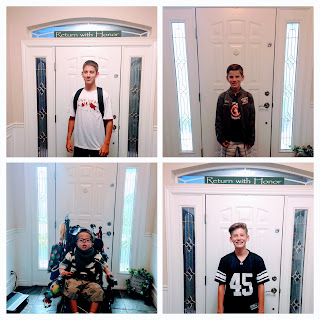 In other news, school started this week.  Aaron is in 2nd grade.  I can't believe it!

I found his report from his teacher regarding those eight days he got to go to summer school.  In group work reading, he identified the main idea 100% of the time using pictures.

He was able to answer who/what/when/where/how questions about 50-60% of the time.

He's starting a new writing program that he's interested in, but still not quite sure what he's supposed to do. 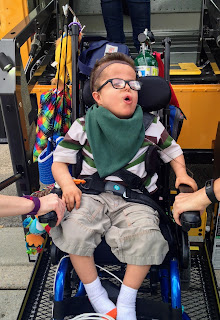 He loves school.  He learns at school.  He is not a vegetable, he's an intelligent child who is trapped in a body that makes it hard for him to communicate. 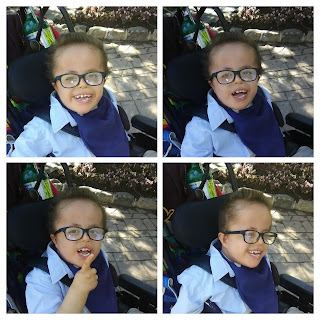 But hey, he has fun, lots of fun.  For all his limitations, he's not limited in his joy and passion for living.  It seems that no matter where we go, what we're doing, he's excited to participate.  And that makes life better for everyone around him, too.

"On the whole, the happiest people seem to be those who have no particular cause for being happy except that they are so."
~William R. Inge

Posted by CompatibleWithJoy at 8:38 PM