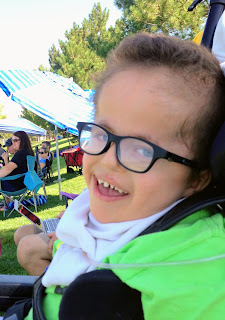 Soooo, we got glasses this week.

I worried that we would have a similar battle with them that we fight with the hearing aid, but figured, maybe not.

Um, nope, not at all.  Oh, he fusses with them a little, pulls them down, or peers over the top, and then laughs when we adjust them.  But mostly, he just wears them and grins.

And even more, it's what we're NOT seeing. 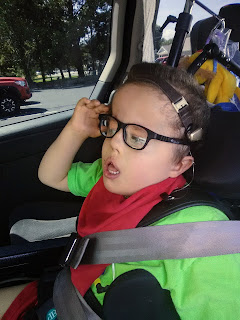 All his life, he's rocked his head back and forth, especially when bored or tired, and especially when upright in his wheelchair.  It's actually a bit irritating to hear the bonk, bonk of his headrest as the post hits against his oxygen tank.  He also hit his head with his fist.  We figured they were just stimming (stimulation) behaviors, you know, just things he did over and over, and were grateful that they weren't more destructive, like gouging out his teeth or other things. But still....

We picked up his glasses on Wednesday morning, and we haven't seen ANY OF THIS!!!

No head rocking, no head banging. I found a picture that showed the difference between an uncorrected and corrected astigmatism, and yeah, if that's what he was dealing with, I'm so sorry!

But we seem to have fixed it.  He's also sleeping less.  Hm, seeing better, probably not having headaches, less tired...  Yeah, I think it could all add up.

Plus his brothers have nicknamed him "The Professor" because they say he looks so smart. 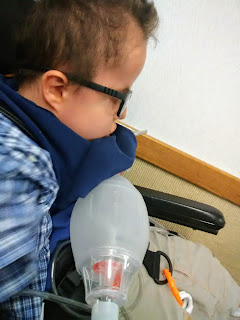 In other news, we continue to battle the after affects of his cold, but it doesn't seem to slow us down much.  There's just too much to do, too much to see.  Today I even managed to put the bag on and help him breathe during church.  Not sure more than one or two people even noticed. Our new slogan:  Have bag, will travel.  What do you think? 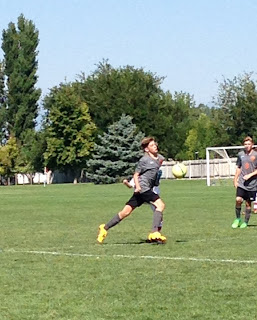 We had a second soccer tournament this week and the annual local SOFT picnic.  The tournament went well and it was so fun to see our friends!  We even met a little girl from Aruba with full T18 who is battling to be given permission by their government insurance to have her heart fixed. 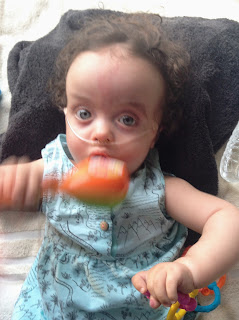 Yep, it's a reality.  It's not just the kids in the news.  Many children and families fight for care.  It's not even a big surgery, at least as far as cardiac surgeries go.  But that darn "incompatible with life" label gets in the way.  But those eyes, those oh-so-soft curls, the cute noises she makes.   Trust me, she's a treasure.  All our kids are. 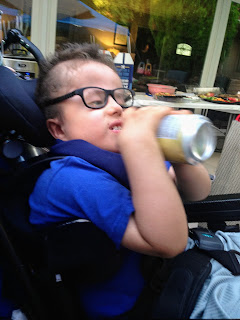 And it's so refreshing to get together with friends who also juggle special needs along side of typical kids and just life! 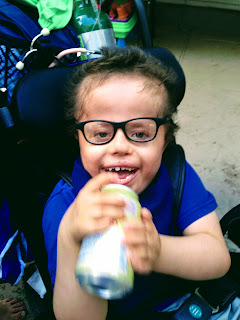 Here he is after swiping his brother's (mostly empty) soda can.  He's totally a tease!  Pretending to do what he watched his brother do but only so far.  He'd put it near his mouth, but in?  Nope, no way.  Which is probably good as he wouldn't have known what to do if it had landed in his mouth.


Yeah, our kids are different from other kids, but they're still kids!  And if you saw them pulling at each other and interacting with everyone, you'd realize that, underneath everything, they're more like other children than not. 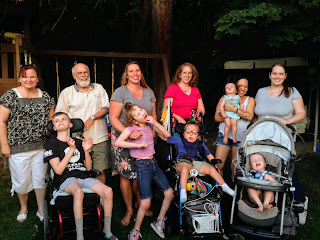 Those who see the world through the lens of love are true visionaries.
Bryant McGill

Posted by CompatibleWithJoy at 9:41 PM