We've been (I've been) on countdown to surgery for the past few weeks.  Thursday morning was T-5 days.  And then suddenly, time sped up.

Actually, we got a call from the hospital Thursday afternoon asking if we wanted a spot on Friday.  Yeah, the next day, less than 24 hours.

My first thought was, "can't do that, there's so much I have to do!"  But my second was, "that's five days that I don't have to worry about him getting sick and making us cancel."  Yep, we took it.

I'm not sure what it was:  the fact that we'd (finally) made it to surgery after rescheduling three times because of illness, that I just know too much now, or the three funerals I've attended in the past few months for T18 babies, but I was really nervous about this one.

The rock settled in my stomach as I hung up the phone and just sat there as I rushed around, rearranging work schedules, nursing schedules and tried to think of what I was missing.  I put together a final care package for Matthew to drop off early Friday morning and sent out texts to family members, blended up meals to freeze to take with us for him, and threw laundry in.  All the while, the prayer kept going heavenward, "please let this work, please let him come through okay."

He did really well, and I'm so grateful.  It took about three hours, but he couldn't have done better.  I was so glad to see Dr. M come into the waiting room with a smile on his face.

Turns out that his right ear DID have a tube in it still.  But it was completely blocked up by tissue, so essentially useless.  They got it cleaned out and working again, could actually see it moving the way it's supposed to.  There was a lot of junk (debris in the doc's words) in his outer ear, but not as much in the middle ear, which is very good.

His left ear was a bit of a bigger challenge.  Not only was his mastoid bone diseased, but so was the 2nd of the three small bones in the middle ear, the incus.  In fact, it was in such bad shape, that they had to remove it as well.  His ear canal is now open to the mastoid bone and it will take some time for it to heal.  Hence the lovely cap that he wears over it.  They could not put a tube in that eardrum due to all the infection and removal of the spongy area in the mastoid plus the bone, so we'll have to keep an eye on it, and (my guess is) try to put a tube in at a later date.

Right now, he's got the cap on his ear, mostly 'cause he's asleep.  Our job is to keep it on for the next week.  He's pretty sure his is to take it off and wave it around.  It's a game, and he's winning.

He's still on too much oxygen to be able to come home today, but maybe tomorrow.  For now, his pain is well controlled, he's happy, and I'm grateful. 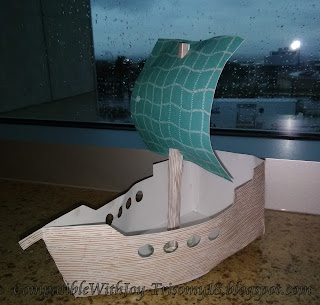 I found this boat that someone crafted when I went to find something to eat in the Ronald McDonald Room last night.  Figured given all the rain we've had in the past few days, it was very appropriate, not to mention, quite cute.


Posted by CompatibleWithJoy at 10:47 AM