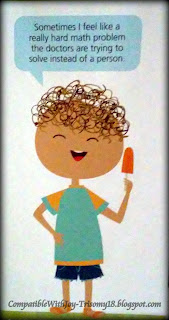 Someone asked me yesterday why we are here.  I said, "I don't know."

This is what we know.  He's needing a lot of oxygen.  That's about it.

The why?  Well, that's still eluding us.

He tested positive (again!) for rhino.  Except the only ones who seem to be saying that's the cause are those who've either never seen him, or only seen him once.  The doctor here on the floor, his nurses, and I are all thinking that's not it.

See, Aaron has a definite pattern with rhino.  Within 24 hours, his nose starts to run.  Then we start pulling junk out of his trach.  Shortly thereafter, his sats end up in the toilet.  Um, nothing from the nose, and almost nothing from the trach.  And his lungs sound good.

And on admit, his white blood count was pretty elevated with a significant left shift.  In English, that means his body was cranking out infection fighting cells, and also releasing them before they're mature to help in the fight. And his protected trach brush (taking some cells from down in his lungs) is growing out large quantities of bacteria.  Those all point to a bacterial infection, not a virus.

Or it could be because we did surgery while he was still trying to recover.

Then there's the pulmonary hypertension.  Yeah, it makes sense that it's playing into it, but why?

I think it's the bacteria that's growing, but it's also a pretty nasty one.  Infectious Disease has been in and they feel like if that particular bug was causing it, he'd be a whole lot sicker than he is.

So now we're waiting on a few more tests to come back, namely to see if there is an antibiotic we can use to knock out this bacteria, and if he even really truly needs it.

And honestly, what we really need is his oxygen to get under control.  But he can be kinda confusing.  Good thing he's also cute.

“Sometimes the hardest pieces of a puzzle to assemble,
are the ones missing from the box.”