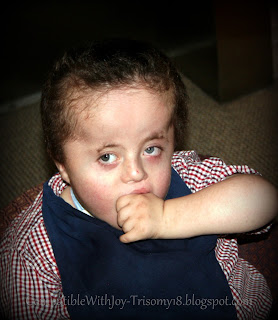 Yep, that about says it.  Sometime in the future, probably next few weeks, Aaron will be heading into the OR again.

He's certainly been there before although not as much as some.  Of course, that's in part due to us piggybacking as many surgeries into one trip as we can.  And so far, we're looking at at least three things.

The reason we're doing it sooner rather than later are those darn ears of his.  Our visit to the ENT last week showed that he doesn't appear to have an active infection anymore, (YEA!!!) but his left tube is sitting ON, not IN his eardrum, and we can't find the right one.  Given that this kiddo comes up with an ear infection every six to eight weeks, well, he needs tubes.

He'll also have a dental cleaning.  Now, I don't know about you, but I think I would be okay with going under general anesthesia for my dental work.  Somehow, I haven't been able to convince anyone that it should happen that way for me.  But they're totally on board for Aaron.

These two really are easy peasy.  He doesn't even have to be able to breathe on his own afterwards.  Ventilators can be really handy things.  We usually start a timer as soon as he leaves the OR and we're on our way with walking papers after the minimum required time. 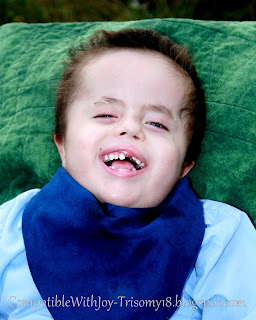 Except I said we've got three things on the docket this time.  Yep, one more.  They're going to fix the notch in his alveolar ridge.  That's the bone that makes up your upper gum in your mouth.  He's got a gap there.  It's been kinda handy.  Perfect place to stick his finger in his mouth.  Except apparently, that bone helps keep your face from collapsing, like a keystone in an arch.  And he's missing some of it.  I had noticed that it was smaller than before, I guess because it's coming in on itself.

So they'll use something called "bone putty" to close it off.  It will work better than a bone graft from his hip, and has the added benefit that we won't have a second surgical site to deal with.  I'm told it's same day surgery, but he'll be really swollen afterwards, and it will be about a six week recovery.

So there's a lot going on.

And to top it off, he's still trying to overcome the pneumonia and the bacteria he grew out back in September.  Remember when we spent Thursday of Fall Break in the ER?  Well, I figured this time I'd misread things.  Apparently he didn't really need to be seen.

Except it turned out that he did.  He continued to struggle through the weekend.  Not really bad, but not his normal self.  He couldn't be off the vent at all and we were using yet more oxygen.  Plus the "junk" in his trach was turning some interesting colors.  At least interesting in an academic sort of way.  Not so interesting when it's your kid and his health, or lack thereof. 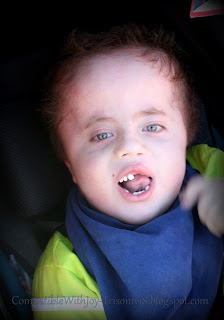 Monday morning I got a call from the ER doc.  Yeah, the doc.  Not the secretary, nurse or even intern.  They took a sample from down in his trach on Thursday and it was growing massive quantities of bacteria.  So back on antibiotics he went.  We're almost done with them now, and I'm hoping, HOPING, that we can have a good long stretch of health here.  We're due for it.

Plus doctors really don't like taking people into the OR who've been sick recently.  And when it's a pneumonia, they like a good six plus weeks.  We need the surgery, we need the health.  They kinda go hand in hand.

So onward and upward we go.  And aren't we lucky to get to enjoy these smiles?  Such a blessing this kid is.


I learned a long time ago that minor surgery is when they do the operation on someone else, not you (or your kid).
~Bill Walton
Posted by CompatibleWithJoy at 9:36 PM