Jumping Back into Life

He's been home for a week now, and we're trying to cram as much as we can into this last little bit before the weather changes. 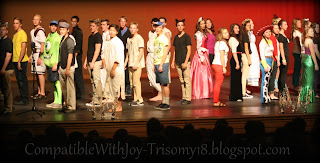 He came home and went to a Disney concert.  We claim Chicken Little, right in the middle in the jeans shorts and yellow shirt.

I think this is one of my favorite concerts, and Aaron LOVED the music.  Rocking out and grinning just like he hadn't been discharged earlier that day.

The weekend found him watching his brother's team cream the opposition (9-0).  All the while, he was working out as well, breathing without any help from his ventilator.  (Which of course was with us, just not turned on.)

Church on Sunday was the Primary program.  Each year I think, well, maybe next year he can be up there with all the kids.  But each time, something stops me.  This year it was the minor detail of him having been in the PICU one week before, and just discharged three days earlier.  Just a little bit leery of having him in such close quarters with so many children.  But it was a wonderful experience and again, no ventilator.

This week he's been to a marching band show where another brother plays the baritone for the Lone Peak Marching Knights.  Again, he LOVED the music.  This mostly deaf kid gets so much enjoyment out of music in his life.  So much fun to watch him. 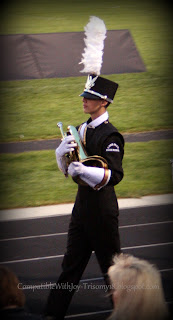 It was a beautiful night, the weather couldn't have been better.  He's been doing so well with his breathing.  Some days he's done eight to ten hours, once he made it 12 before we put him back on the vent.  Today and yesterday were a bit less, more like six.  But still, six hours.  One of the doctors in the PICU actually got teary when I told her what he'd been doing.  This was not something that was "supposed to happen."

A few years ago when we were in, I told them my plan for weaning off the vent.  She was part of that group.  They kinda looked at each other and shook their heads.  I could almost hear them thinking, "we thought this mom was well-grounded in reality, I guess not."

Wednesday, sadly, he attended a funeral with me for a dear neighbor.

Later that day, he got a fun package from an adopted "grandma" in Australia.  She sent him a bunch of story books, a calendar, and some cute cut outs of animals. 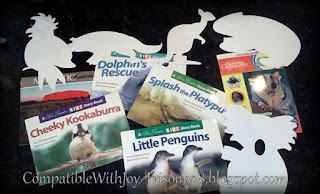 Then yesterday he had an appointment for some leg braces (DAFOs).  They'll help keep him from hyper-extending his knees when he uses a gait trainer.  Poor kid was a bit nervous about that one.

See, usually when someone is looking at and pressing on his feet, the next thing that happens is a tourniquet is wrapped around his calf and a needle is poked in, and dug around with in his foot.  Not a pleasant sensation.  But he held it together, probably a whole lot better than I would have.  His eyes were big, and he was tense, but there were no tears.  I think I would have been a blubbering mess.

Anyway, we're trying to get as much in as we can before bad weather shuts us down.  See, not only is it really hard for me to lift the wheelchair in and out of the back of the car, but loading and unloading him into the chair exposes him to the elements for a five to ten minutes each time.  That's just too much if it's raining or snowing, or even if it's really cold.  And that means, literally exposed.  Door open, moving him, moving his equipment.

So we'll make hay while the sun shines, and see as much of the world (or our little corner of it) as we can.  Love that wherever he goes, whatever he does, he does it will a great attitude.  And he shares it so it can rub off on the rest of us, too.


Don't be fooled by the calendar.
There are only as many days in the year as you make use of.
~Charles Richards
Posted by CompatibleWithJoy at 6:32 PM