We've Made the Jump

There wasn't much going on yesterday, so I didn't get a post put up.  Today, however, he's taken that big step.  He's now using his home ventilator (okay, it's the hospital's vent, but the same model we use at home) and doing really well! 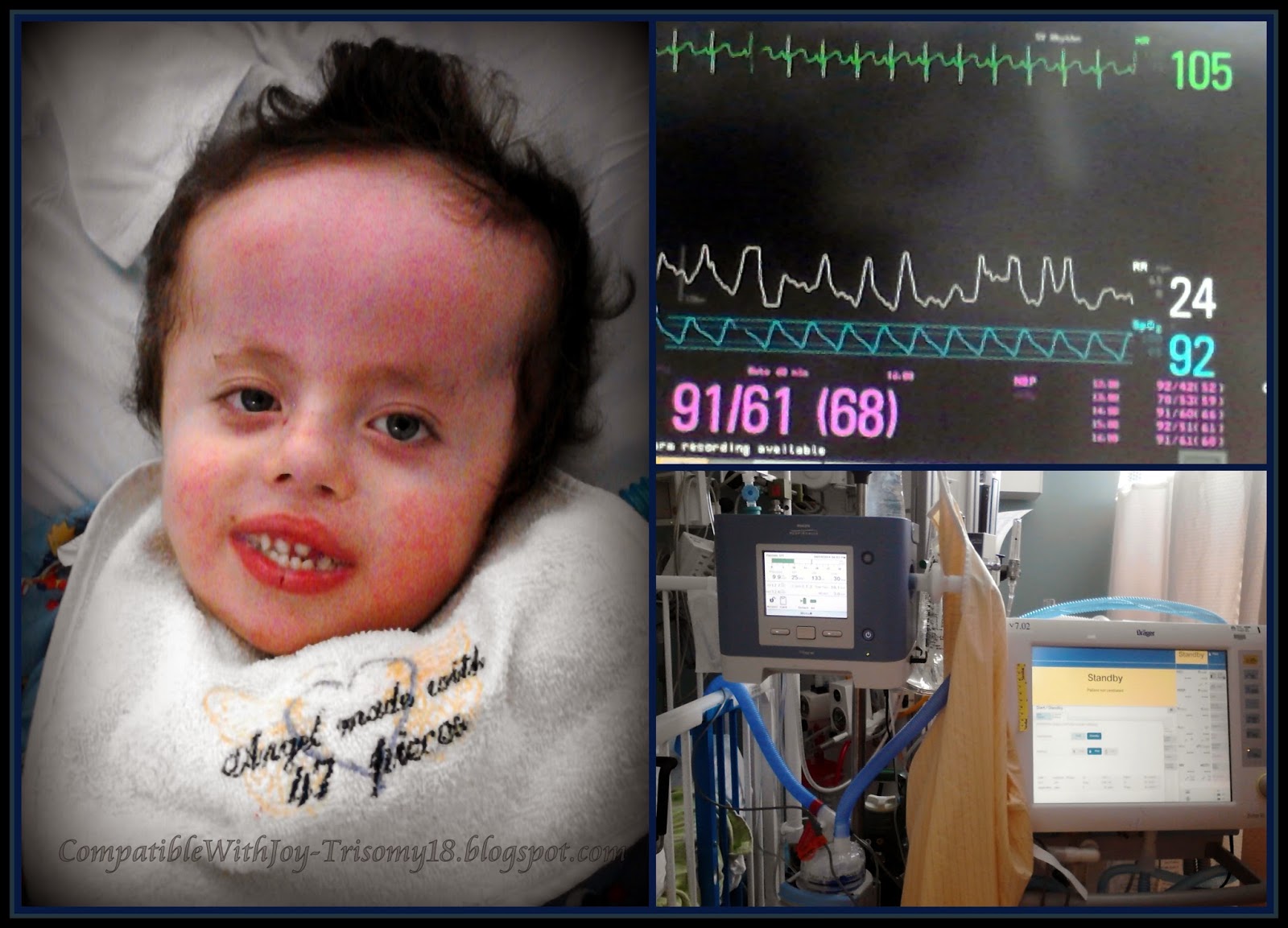 He is still sick.  He's still using more oxygen that usual.  But the leak around his trach has increased again.  You know how when you get sick, your throat feels scratchy and maybe a little sore or swollen?  Yeah, it really is swollen, but we don't measure our throats so much.

However, his ventilator has a way of measuring how much of a leak he has around his trach, how much is escaping up and out of his nose and mouth instead of back out through the vent circuit.  Last Tuesday morning, long, long before we saw any signs of illness, I noticed that his leak was smaller.  At the time, I just thought, "huh, wonder what's up with that?"  And kinda kept an eye on it over the next few days.  It stayed smaller, and I tucked that info into the back of my mind.

Well, today, back on his ventilator, that leak is bigger again.  Not quite as big as it usually is, but pretty darn close, and closer to where it usually is than where it was before he showed signs of illness.

So I guess I've maybe got another way of forecasting illness for him.  Because that leak got smaller on Tuesday morning, and he didn't show any real signs of illness until Thursday evening, more than 48 hours later.

And this monkey?  What's he up to?  Well, actually right now, he's sleeping.  He's stirred a couple of times when we've been talking, even opened his eyes briefly, but it was a "really guys?  Can't you see I'm trying to sleep here?" kind of look, and then back to sleep.

This morning though, he was really on one.  There's a gray temperature probe that plugs into the circuit down by him.  Yeah, he got a hold of that a few times and pulled it out.  Then another time, he pulled off a sensor that's designed to measure the gasses he's breathing out.  And put it in his mouth.  Yeah, the ventilator wasn't real impressed and started squawking.  The rest of us thought it was kind of funny.  Besides, it showed that he's getting more playful, more energetic, and feeling better.  All good signs.

So we won't be going home tomorrow, but my guess is we'll make it to the floor.  And then we'll just have to see how long it takes him to get his oxygen requirements under control.  But I think we might be in the homestretch.

Oh, and just an FYI: Respiratory season is far from over. In our little row here in the PICU, Aaron is the only one who has underlying issues. All are in for respiratory viruses/issues and range from about 2 weeks to 2 years in age. And I don't even know what all is in the other rooms here.  A simple cold, even for an otherwise healthy infant/toddler is not always simple. Wash your hands and stay home if you're not well!


Life's problems wouldn't be called "hurdles"
if there wasn't a way to get over them.
~Author Unknown


Posted by CompatibleWithJoy at 5:34 PM